In my recent genealogy research, I’ve focused on my father’s side of the family that were early settlers in the colonies we now call America. I’ve found a number of ancestors that fought in the Civil War, on both sides even, and in the American Revolution. To say that it’s hard to break away from researching the past is an understatement.

In my daily life, the word “hardtack” keeps appearing. I recently read a passage in a book that referred to a soldier’s meal of hard tack, and later that day, I overheard a video my husband was watching in which a man was talking about hardtack that was excavated from a Civil War site, and was still pretty intact. It was over 150 years old! The man in the video said that the flavor was similar to mothballs, and the smell was, too. It was over 150 years old and that guy took a bite of it. Seriously.

I imagine a fair share of hardtack was consumed by soldiers in these parts back in the 1800s when the local forts were filled with men protecting the frontier from Indian raids.

Hardtack is a simple, unleavened biscuit or cracker with little holes poked in each. It’s made of flour, water and a little bit of salt if salt was available. It’s rolled out, cut, poked and baked until there is no moisture in it, thus resulting in a long-lasting and inexpensive sustenance when perishable foods aren’t an option.

Hardtack was edible in its dry cracker state, but most soldiers preferred to eat it after being softened in a liquid, used in soup as a thickener, or fried in pork fat. The more I read about it, the more I learn that while it was a vital part of the soldiers’ sustenance, it was despised by them as well.

I’ve been fascinated by the fact that soldiers relied on it for survival because it doesn’t sound very nutritious. It has an indefinite shelf life if kept in a sealed container like a mason jar. So of course, I had to give it a try.

The holes in crackers – like saltines and many other crackers with these holes – were made by a process called “docking.” They help the cracker to bake evenly and prevent them from rising like a bread. Historically, this was done using hand-held tools, but by the Civil War, there were mechanical tools that accomplished the task. I used a screw that I found in my kitchen junk drawer.

The hard tack recipes that I found were all the same. There’s not a whole lot you can change up in a recipe like this, especially when you’re looking for something with a long shelf life.

I mixed the water with the flour and salt to form a sticky dough. Rolled it out on a floured surface. Cut it (I used a pizza cutter), poked it, and baked it for 30 minutes per side, to make sure all of the moisture was baked out. I was getting pretty excited when the scent of baked bread was wafting through the house. 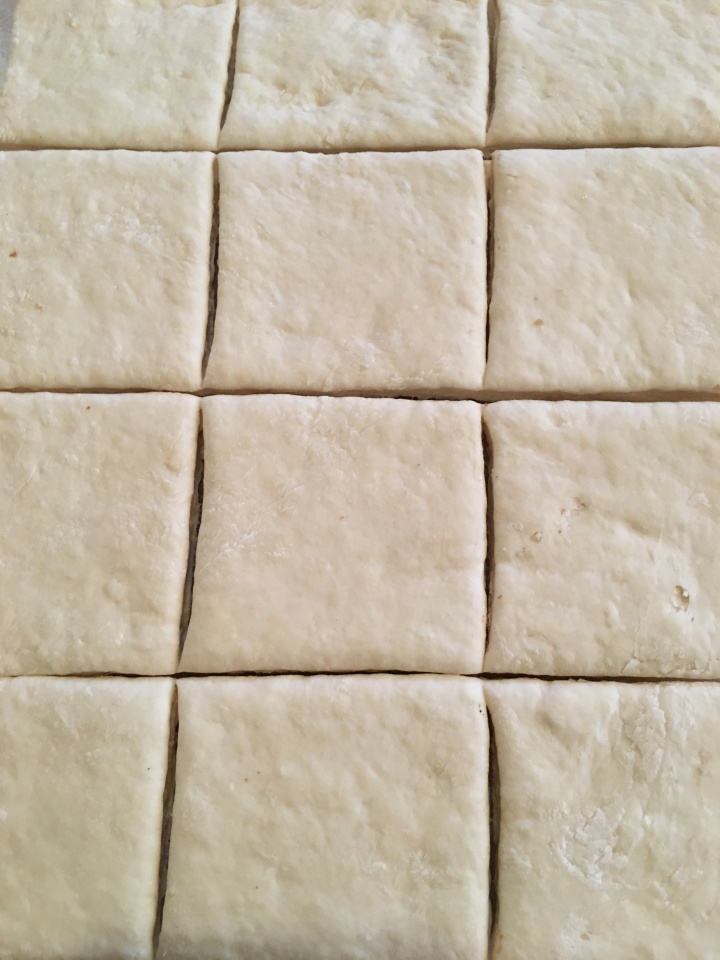 I removed my sheet of slightly-browned hardtack and let the crackers cool. I tried to take a bite of one, and I’m grateful that I didn’t crack a tooth. My husband came into the kitchen and grabbed one, and it was all I could do to keep from slapping it out of his hand, mid-bite, to keep his teeth intact. The squares reminded me of baking homemade Christmas ornaments to paint. I’m glad I saved my husband’s teeth from a taste of hardtack.

I read that good ways to eat it is by softening the cracker in milk for 15 minutes and then frying it in a skillet with butter, or adding it to a soup or broth. Many folks used to soften up in their meal of hardtack in coffee.

I couldn’t get it to soften and ended up throwing it out for the neighborhood deer and javelinas. It took two days, but they ate it all. I guess that’s how long it took to soften in the morning frost and dew.

I plan to make it again, and bake it for less time. I rolled it too thin (1/4 inch rather than the recommended ½ inch) and the thinness contributed to the extra-hard-as-a-rockness.

Maybe in 150 years, my kitchen will be an excavation site and any leftover hardtack will still be recognizable…

Combine the flour, salt, and water in a bowl. After mixing, scoop the dough onto a floured countertop. The dough will be sticky at first. Knead until mixed thoroughly.

Roll out about ½-inch thick into a rectangle shape. Use a sharp knife to cut the sections evenly about 3-inches apart (the result should be nine crackers). You can use a ruler to keep them square. Use a nail (or something with a sharp point – I used a screw) to make the docking holes.

Preheat the oven to 375 degrees. Place the hardtack pieces on an ungreased cookie sheet and bake one side for 30 minutes, then turn the hardtack over and cook the other side for an additional 30 minutes. After baking, place the cookie sheet on a cooling rack. Store in airtight containers. If properly stored, hardtack can stay good for at least 50 years.

2 thoughts on “Hardtack – the bread that lasts forever”