A couple years ago, I discovered a phrase that people have been using to describe an aspect of life in Far West Texas. That phrase is, “getting off the island.”

With nearly four years of living full-time in Fort Davis under our belts, I understand the analogy completely, and was grateful to be able to finally put the feeling into words.

Our years of being part-timers didn’t really prepare us for “desert island living.” I’m not complaining, I promise. But I have picked up a survival tip or two for this unique island living.

Living out here in the Trans-Pecos, we are living on islands made of sand, rock and cacti. It takes considerable travel over vast seas of rough terrain to go anywhere. I spent four years living on Galveston Island, and would sometimes forget about the mainland just across the big bridge… like we sometimes forget about getting off the island when we’re out here.

Gulf Coast seafood is my personal favorite since that’s what I grew up on and eat at every opportunity, but life in the desert doesn’t always give us those opportunities.

Rather than driving nine hours to the coast for a Gulf seafood trip (which we have done a time or two), we left the island a couple weeks ago for our every-other-month trip to El Paso for supplies we can’t get anywhere in the chain of Trans Pecos islands.

We knew starting out that Sprouts Market in El Paso was having a tremendous sale on some of our favorites… frozen jumbo Gulf shrimp, and wild caught Alaskan Sockeye salmon filets that had never been frozen. I’m not sure how the salmon made it from Alaska to El Paso unfrozen, but they did and they were beautiful. We stocked our freezer with frozen shrimp, salmon and even got an enormous tuna loin to be sliced into steaks and grilled.

The shrimp for the restaurant came from Imperial, Texas, just down the road, between Fort Davis and Odessa. Long story short, in the 1970s, some folks had the ingenious ideas of filling unused gravel pits with saline water that is found in the Permian Basin, since the area was part of the ocean and underwater, once upon a time.

Once they found out the water could be used, they stocked it with shrimp, and in some places, redfish. In the years that followed, shrimp farms popped up in West Texas and sold shrimp in restaurants and through retail to operations like Tommy’s Seafood in Fort Davis. From what I’ve read, the shrimp farmers stopped selling to the public in 2006, but the Imperial Shrimp Farm is being used as an organic marine fish and shrimp farm research facility for different universities. I hope they start selling to the public again.

Our most recent trip off the island landed us in El Paso. We returned to our desert island home in the Davis Mountains, and filled our freezer with seafood from faraway waters. I think that’s West Texas island living at its finest.

Cajun Creamy Shrimp Sauce with Pasta
This is a favorite I always make a couple times when we have shrimp. I’ve shared this recipe before, but here it is again, in case you missed it. You can serve this over pasta, or atop baked salmon or cod as I like to serve it. For extra flavor, add chopped bacon when sautéing the veggies)

Peel shrimp, and devein, if desired. Toss shrimp with Creole seasoning; set aside.

Melt butter in a large skillet over medium-high heat. Add shrimp, and cook, stirring constantly, 5 minutes or just until shrimp turn pink. Remove shrimp from skillet. Add onion, celery and garlic to skillet and sauté 2 to 3 minutes or until tender. Reduce heat to medium; stir in cream and hot sauce. Bring to a boil, then reduce heat, and simmer, stirring constantly, 8 to 10 minutes or until sauce is slightly thickened. Stir in shrimp and parsley. Toss with pasta, or served atop your favorite cooked fish. Sprinkle evenly with Parmesan cheese. Serve immediately. 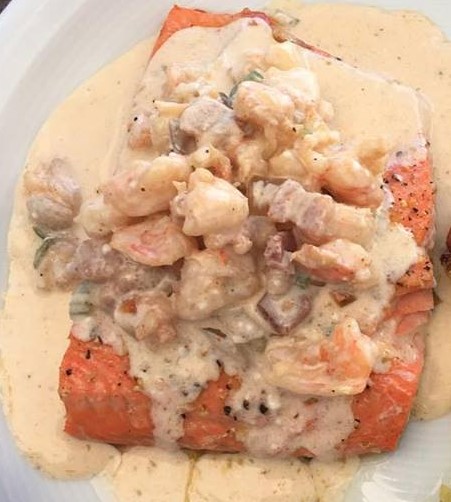