After five years of faithful service, a vital member of our kitchen staff retired, without notice.

The other morning, the Keurig sat in a puddle of water that should’ve been run through grounds. About half of the specified amount of coffee was brewed. I knew the end of our coffeemaker’s employment was here, and no amount of descaling would bring it back.

We’ve had five wonderful years of grinding beans fresh every morning and using our refillable cups to brew one delicious, day-starting cup of java at a time. Five years seems to be the lifespan for small appliances in my kitchen, as my high-end convection toaster oven went kaput mid-bake a few weeks earlier. They just don’t make things like they used to.

We ordered the replacement part that according to the internet, was the typical fix for this oven, and it found that even with the new thermal thingie, it was still dead. The next replacement parts attempt would cost about equivalent to buying a new little oven, so I tearfully asked my husband dispose of the lifeless appliance that has gotten me through so much in the kitchen, and many a bake sale, six big muffins at a time. I couldn’t be the one to put it in the trash. Isn’t that silly?

We’ve had a number of different types of coffeemakers over the years, but the single-cup maker has been very convenient for us. We had one fancy unit that ground the beans at the set-time and brewed freshly-ground coffee every morning. The grinder sounded like a jet-engine firing up, and didn’t grind the beans the way we like them. I don’t miss that.

I have the sometimes unfortunate habit of buying things I “like” rather than things we actually “need.” I’ve had a vintage stainless steel Farberware coffee urn collecting dust for quite some time now, after buying it at a moving sale in Fort Davis for a price I couldn’t refuse, because I really, really liked it.

Who knew when we’d need to make 55 cups of percolated coffee? I certainly could’ve used it when my family was visiting this past summer, rather than filling up a carafe, one 16-ounce cup at a time, with the Keurig. It’ll get put to use when the family comes back for Thanksgiving.

With the retirement of our one-cup-at-a-timer, I washed the dust off the shiny ol’ 55-cupper and made space on the counter. It’s huge, but the footprint is about the same as its predecessor.

I was hesitant to use such a beast for just the two of us, with our combined coffee-consumption running no more than 8 cups total per day (a standard cup is considered 8 ounces), and spent the first couple of Keuringless days making coffee in a French press.

Grinding up a batch of Big Bend Coffee Roasters “Davis Mountains Blend,” heating the water in the tea kettle, pouring it over the fresh grounds in the French press carafe, giving it a stir and waiting a few minutes before pressing the plunger down to separate grinds from coffee was a nice morning ritual, but wow, that was some strong stuff. Having to do it twice was kind of inconvenient. 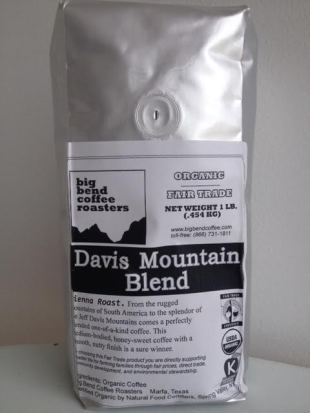 The huge coffee urn will probably be going back into reserve soon, as it is a little bit of overkill for just the two of us. I’m glad we have it to get us through to the next coffeemaker. I’m also glad to keep the French press on hand because sometimes, less is more.

Today’s recipe is from a cookbook written by Alpine’s Gwin Grimes, who is also the librarian at the Jeff Davis County Library and a friend of mine. She wrote the cookbooks, “Coffee Creations,” “Gorgeous Garlic” and “Nuts: Pistachio, Pecan & Pinon” when she lived in Fort Worth and was a restaurant reviewer and restaurateur. I have the coffee and garlic books in my collection.

These rich, chewy brownies don’t need frosting, but you could sprinkle a little powdered sugar on top to serve.

In a microwave-safe dish, heat the chocolate chips and butter at medium power in microwave for 30 seconds. Remove and stir. Repeat in 15-second increments until the chocolate is melted and smooth. Set aside.

In a bowl, whisk together the flour, sugar and baking soda. Add the reserved chocolate mixture, instant coffee, egg, egg yolk, coffee liqueur, and vanilla, and stir until just combined. Bake for 20-25 minutes. Remove from the oven and set the pan on a wire rack to cool completely before cutting. Serves 9. 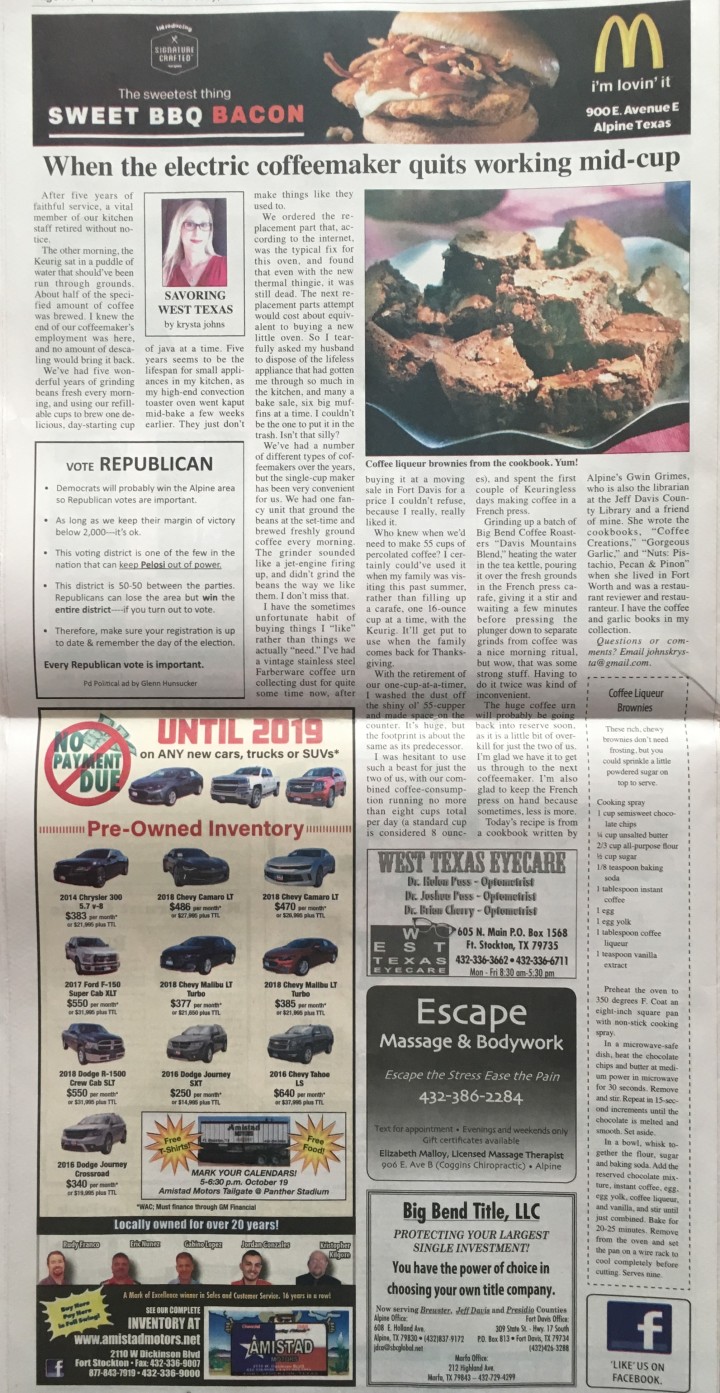