Having recently returned from a whirlwind trip from West Texas to East Texas for a family funeral, I spent a lot of time thinking about the importance of family. Driving 1200 miles in under two days gives you time to think.

I realized that my dearest aunt, widowed after 66 years of marriage, is not only my mother’s last living sibling of six, but she’s also the last 100% Wendish Texan in our family line. My generation is 50%, and luckily there’s lots of us… most of us have kids and some even have grandkids. But to think that we only have one true Wend left in our branch of the tree is startling.

I’m sharing some photos I’ve taken of a few of the Wendish books I own, just because I think they are interesting…

I’ve been dabbling in genealogy for a while now… many of you know that, and some of my local fellow Texas Wends have even reached out. I hope to hear from more of you. The Texas Wendish Heritage Festival is in Giddings, TX in just a couple weeks. One of these days, I plan to go and eat a bunch of noodles and sausage, tour the Painted Church my ancestors attended, and come home with a painted egg.

I’m not sure who to give photo credit to for the eggs… it’s one of my favorites from the internet! I did not take this picture. 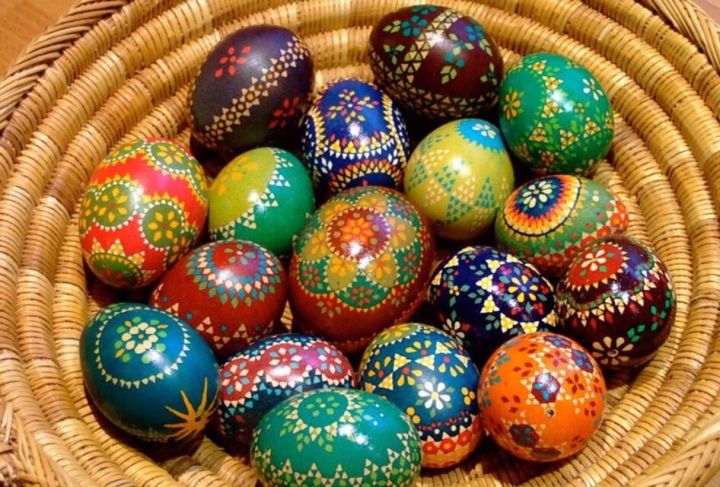 The Texas Wends, my ancestors Johann and Maria in particular, left Saxony, Germany in September of 1854 to arrive in Galveston in December, in search of a place to continue to practice Lutheranism.

Less than two weeks into their journey, Johann and Maria lost their two-year-old son. My guess is that he was a victim of the cholera outbreak that took the lives of one out of every eight people on that ship, the Ben Nevis.

They and many of the others on the small ship eventually ended up in the Rabbs Creek area where they settled, most into lives of farming. 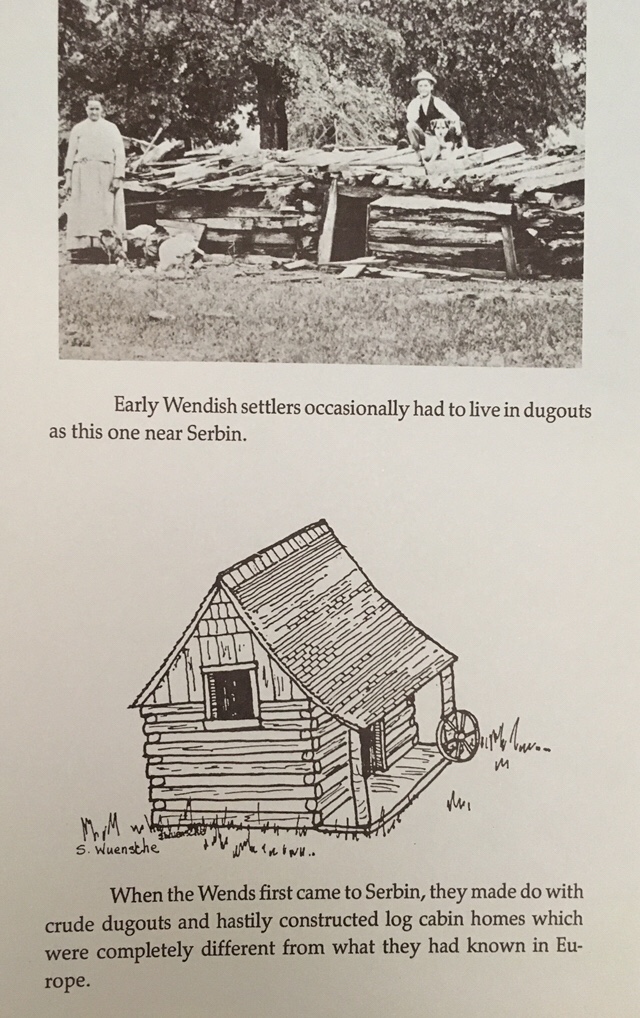 I’ve learned that Maria was buried in Walberg, with many other of our relatives. With all the family reunions I went to in Walberg, I had no idea just how special that place was to our heritage.

I’ve been absorbing anything Wendish I can find – and I currently have twelve tabs about Wends open on my computer.

My dear friend Elaine Harmon gifted me with a treasure not long ago – an autographed copy of George R. Nielsen’s book, “In Search of a Home: The Wends (Sorbs) on the Australian and Texas Frontier,” and I have found numerous ancestors from both sides in this wonderful book.

Below are my new favorite book and my scribbled notes… I will be putting the notes in a more legible form to share with family members. 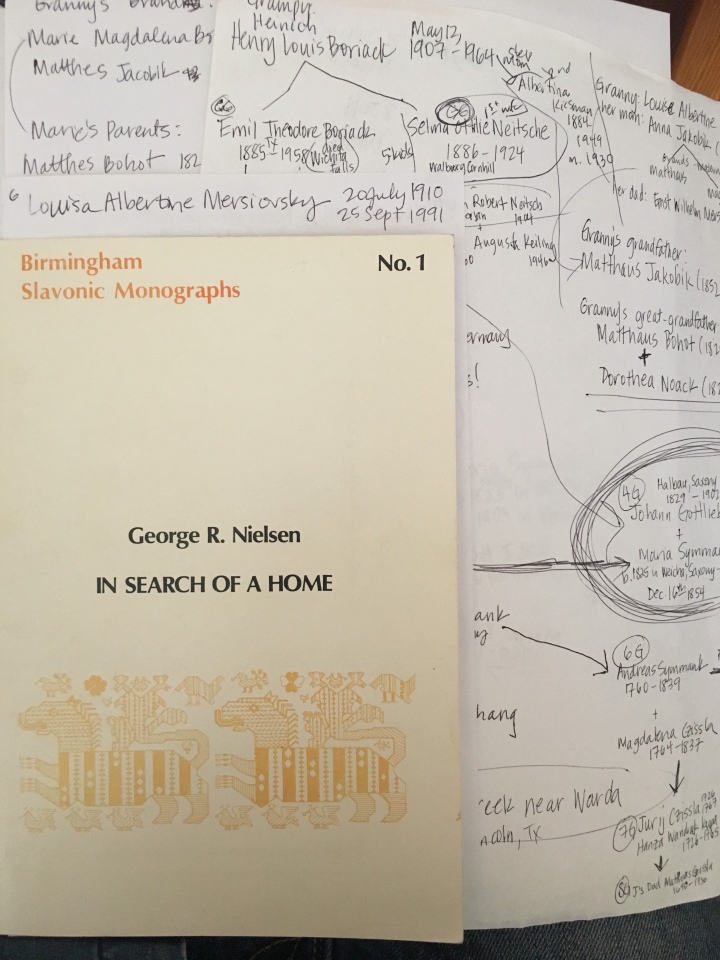 I recently purchased the original Texas Wendish Heritage Society cookbook published in the 1980s, and love seeing familiar names and recipes, as well as tidbits about the Wends that I never knew. Many of the Wends lived in dug-outs before they were able to build cabins… a far cry from the more luxurious lives they led in south-eastern Germany, near Berlin.

Lots of the recipes were simple – tried and true, old family favorites that really didn’t have amounts listed because they’d been made so many times, it was almost like the cook’s hands just went by memory. One line that struck me was, “Our oven never had a temperature gauge on it, so just cook it until the top browns a little.”

My Wendish granny used to make noodles with just about every meal, and our family reunions always had never-ending noodles on the food tables. Noodles are a Wendish tradition, and the cookbook even stated that there were few, if any Wends, that didn’t recall seeing noodles draped over every chair in the house to dry after the lady of the house made them. Cooked in chicken broth and served with butter, just the thought of that wonderful comfort food makes my mouth water. 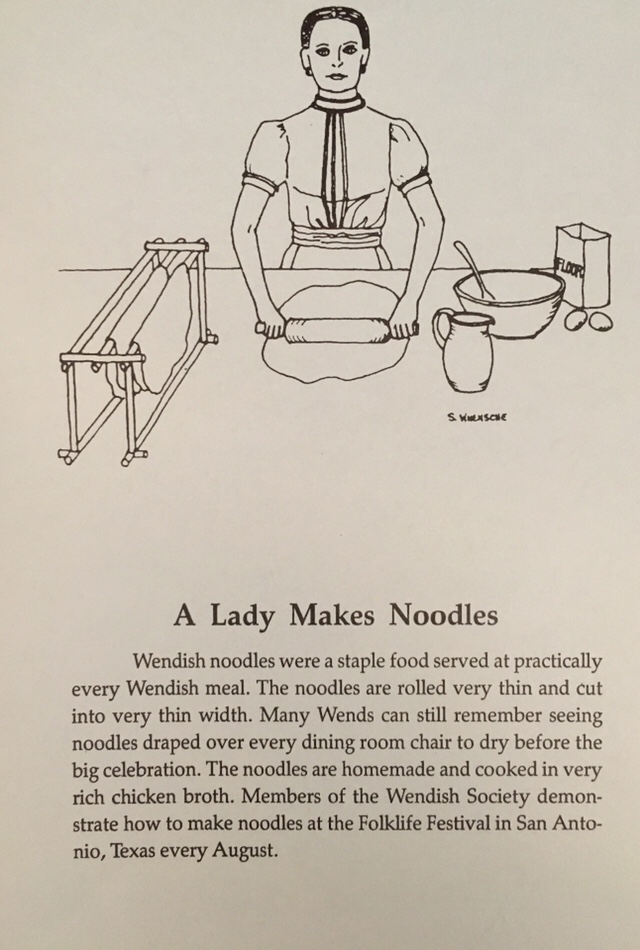 Granny’s potato soup I grew up with, and then made for my own daughter as a comfort food when she was feeling under the weather, is actually a German Potato Soup recipe in the cookbook. Makes sense.

I could go on and on because I’m so excited to learn of my people back to my daughter’s 9th great-grandparents, through both of my mom’s Wendish parents. My aunt identified a photo of my great-grandparents that I’ve had for years and didn’t know who they were.

Below are Great-Granny Anna and Great-Grandpa Ernst. Gone long before I was a glimmer in my parents’ eyes.

There’s so much information available to us about our heritage, all we have to do is look for it. I’m on a mission to keep the Wendish heritage alive in my generation and for our descendants, and where better to do that than in the kitchen? I’ll be making homemade noodles soon.

Boil potatoes, onions and celery in salted water until tender. Process in blender until smooth and return to pot. Add rest of ingredients. If you prefer a chunkier soup, don’t blend it. You can garnish it with more of the herbs, chives, or crumbled cooked bacon. Adding cubed ham or sliced cooked sausage makes for a hardier bowl of soup.

3 thoughts on “Keep your family heritage alive in the kitchen”