Last summer, I wrote about how we planted thornless prickly pear in our landscape.

Following their debut season of spectacular yellow blooms, they are now loaded with fruit, known as “tunas.” Big, healthy cacti loaded with fruit that has yet to turn anything close to the big purple fruit adorning its thorny relative all around us. We can’t quite figure it out.

We even saved them from hungry wildlife early in their lives… 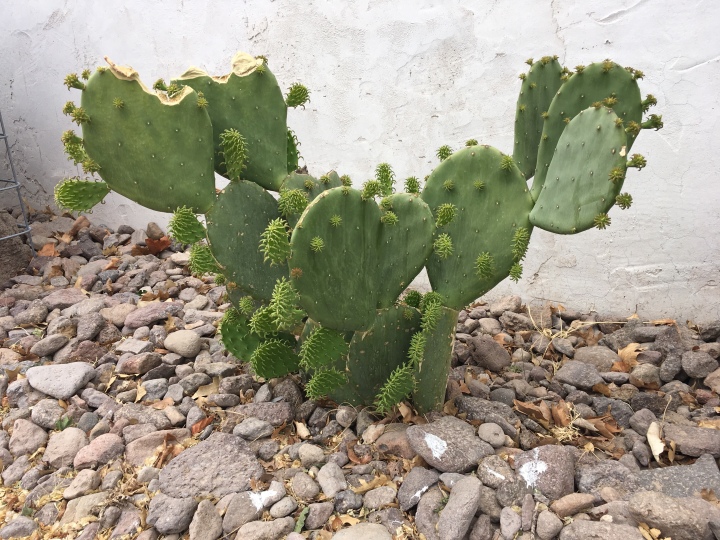 Without purple tunas of our own yet, we recently harvested some prickly pear fruit from an overloaded cactus on an ignored stretch of road.

Last year, after the yellow flowers turned to purple fruit on the countless prickly pear cacti around us, I put on my snake-safe steel-toe boots, work gloves, grabbed my tongs and a bucket and picked some tunas. This year was no different, except that there were two of us picking.

“Nopal” is Spanish for cactus. It has been a staple food for Native Americans for centuries. In Mexican and Mexican-American cultures, nopal (specifically prickly pear) is part of the diet, but only the young plants are eaten because the older they get, the tougher they are. I love a good nopalitos salad, made with the green pads of the cacti.

Containing fiber and pectin, it is said that ingesting the cactus can lower blood glucose by decreasing sugar absorption in the stomach and intestine. Some research has shown it can possibly even lower cholesterol levels and kill viruses in the body.

Careful not to touch the tiny hair-like thorns on the mighty purple superfruits, I dropped them one at a time, whole, into our Acme Juicerator and was rewarded with thick, gooey purple-magenta prickly pear juice.

Little rock-hard, inedible seeds managed to shoot out of the juicer, but luckily, the hair-like thorns were kept in the machine until I cleaned it out.

I cooked the thick juice into a syrup, and kept that precious pint of the purple stuff in the fridge, adding a little here and there to salad dressings and margaritas. I recently ran out.

Last year, I was alone in my picking and juicing efforts while my husband was busy doing heavy construction work. This year, he spear-headed our prickly pear efforts.

At the helm of the trusty Acme Juicerator, he began dropping in the fruits, one by one, seeds shooting across the kitchen every which way, just like when I did it last year.

After filling a big mason jar with the precious purple juice, we discovered that juicing the entire fruit, skin included, made it almost too thick to work with.

I’ve read of several different ways to peel the prickly pear fruit… many of them included fire. Using a torch and singing off the tiny hairs was one method, and another was firing up the barbecue grill and basically toasting the tunas to get rid of the prickly hairs. Those methods sounded easy enough, but I’m not always one to do things the easy way.

It’s not an easy task to peel a prickly pear fruit, but I managed to get through them all, not quite unscathed. Prickly pear tunas are slippery, and I lost control of one… it managed to land up against my apron, attached like Velcro.

Not thinking, I ran my hands over my apron to wipe them off, and found all of the teeny stickers that came from that one little fruit, with both of my hands. I can’t see them but I know they are there. Be more careful than I was.

How to make prickly pear purée:

Peel, seed, rinse and drain your prickly pear fruit. Muddle it for several minutes until a slightly liquid purée remains, or for a larger batch, toss it in your blender.

Shake all ingredients together in a mason jar or other jar with a lid. Makes about 1 cup. This pretty pink dressing is thin like an oil and vinegar dressing, but lower in calories and good on fruit salads and tossed green salads.

Chop orange peel and pulp. Add 4 cups water to lemon and orange. Let stand 12 to 18 hours in a cool place. Boil until peel is tender. Cool. Measure lemon, orange and water in which cooked. Add chopped prickly pear tunas and 1 cup of sugar for each cup of combined prickly pear, lemon, orange and water. Boil to the jellying point. Pour, boiling hot, into hot jars. Seal at once. 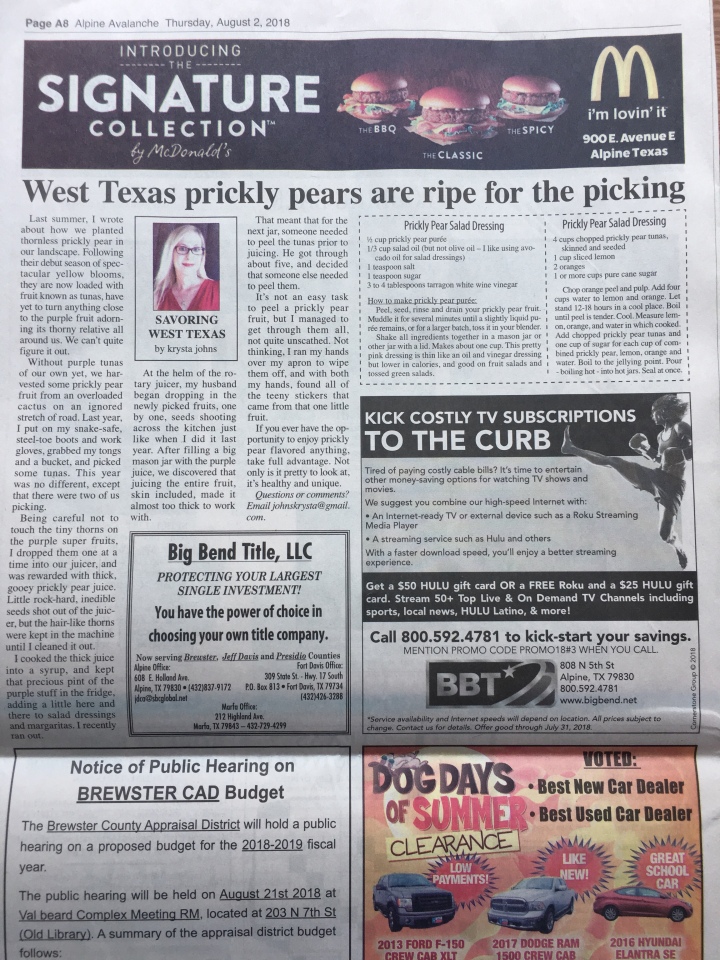