A little over 15 years ago, my first newspaper column about food was printed in the Boerne Star. It was a cold and blustery winter day when I sat down at the computer, fretted, and pecked out a short story about why-you-should-read-this-recipe-column. I credited my mother for the recipes I was sharing that day as they were some of my favorite soups she made when I was growing up. She felt like a celebrity.

It was a guarantee that if the weather was cold, with or without gray skies, Mom would have a pot of soup on the stove when I walked through the front door after school.  Thinking about it gives me a warm, fuzzy feeling even now, and that was well over 30 years ago. Sometimes, she’d even have a bowl cooling for me, along with crackers with butter on them, to eat after I washed the school off my germy little hands.

Most of the soup recipes were in fact from my granny, her mother. I am grateful to have the recipes written on recipe cards in my mother’s pretty, cursive hand. In these days of smart phones and computers, I still love cookbooks and recipe cards.

Not long ago, I was feeling nostalgic and made a pot of her cheesy cabbage soup. I made a few minor adjustments that suit our nutritional habits (I used chicken broth instead of bouillon cubes and grated Monterrey Jack cheese instead of Velveeta).

Just the scent of the vegetables sautéing threw me back to the warm kitchen of my childhood home. Isn’t it funny how scents trigger memories and make you feel like you’re back in the moment? Close your eyes, take a deep breath, and time travel for a moment. I love that.

I posted photos of the soup on social media, and was pleasantly shocked at the response from friends that follow my photos.

At least half a dozen of them told me that this was their family’s “favorite soup ever” – and that they’d been making it for 15 years – ever since they saw it in the paper. Two sent me photos of the actual newspaper they’d saved from back before I even knew them in “real life.” One shared that it was the only way he was ever able to get his kids to eat cabbage, because the cheese soup is loaded with cabbage and other veggies.

And here I thought I was just filling up some newspaper space with food that I like, and stories about stuff.  I guess not much has changed in the last 15 years.

I’ve been on a soup-making spree for a couple months now. I have a number of different potato soups that we enjoy, and they vary from brothy to thick and creamy. Beef stew is always a winner. I made a roasted jalapeno soup the other night that was partly inspired by the Reata Restaurant’s Jalapeno Cream Soup but was mostly me tossing in other things like chicken and cream cheese and corn. It was delicious and I probably couldn’t recreate it exactly if I wanted to. A pot of chicken “Feel Good” soup is simmering at this very moment.

Mom’s Cheese Soup is easy to make, and the flavors of it meld in such a surprising way that it might just have your kids asking for seconds. I think it’ll be next in my soup rotation.

Saute with 1 stick of butter:

Cook slowly for 1 hour. Cut up 1-pound block of Velveeta (or substitute 3 cups grated Monterrey Jack cheese), add it to soup and simmer for 30 minutes. This recipe can be halved. 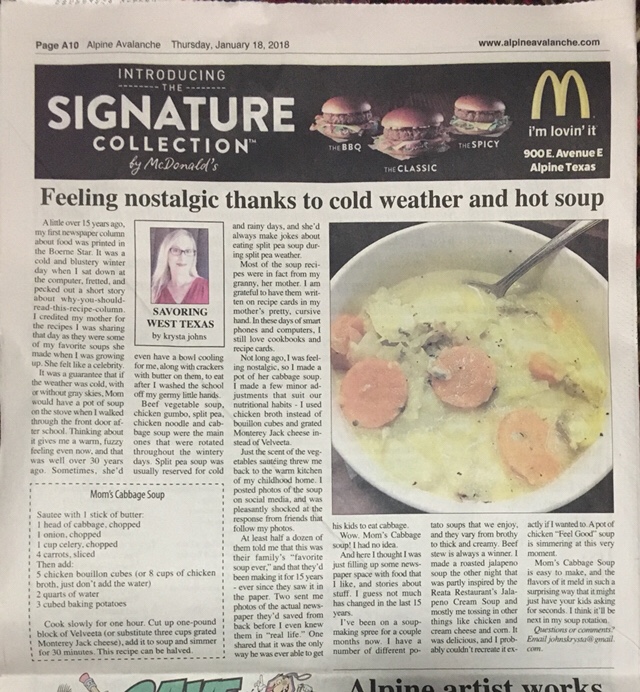