I’ve been on a baking kick lately and I can’t decide if that’s a good thing or a bad thing. It’s a great feeling to be baking again after a year-long hiatus since I haven’t had a large oven to use. There’s been a cobbler or small coffee cake thrown in here and there but lately I’ve been longing for banana bread and blueberry muffins that I used to whip up when we had a full-size kitchen at our disposal.

A year into RV living, with experiences cooking outside and in our cozy RV kitchen, I have built some culinary character that I wouldn’t otherwise have if we still had the spacious comfort of a big kitchen. At this point, I’ve learned to adapt and have gotten pretty good at baking in small batches and in my convection toaster oven.

The Fort Davis Lions Club Bake Sale a few weeks ago made me realize that I don’t mind only being able to bake six big muffins or nine cookies at a time. How much baked goods do we really need to have around for just the two of us to eat? Small batches are just fine.

I recently discovered a recipe for a muffin that is made in the blender and contains no flour. It was described as “magical.” I had all of the ingredients on hand, and decided to blend up a batch in my ever-so-handy Magic Bullet blender that fits perfectly in the RV cabinet.

In the largest blending cup (usually reserved for smoothies or salsa), I blended uncooked oats, plain yogurt, an egg, some honey, vanilla, a banana, a little salt and some baking powder and baking soda. Blended it up and grabbed the rest of my ingredients for the six big muffins that were about to turn into magic… do yourself a favor and have all of your ingredients ready before you mix up the batter, because it grew and exploded with a loud “POOF” when I took the blender lid off. That was a surprise. Baking soda is powerful stuff. 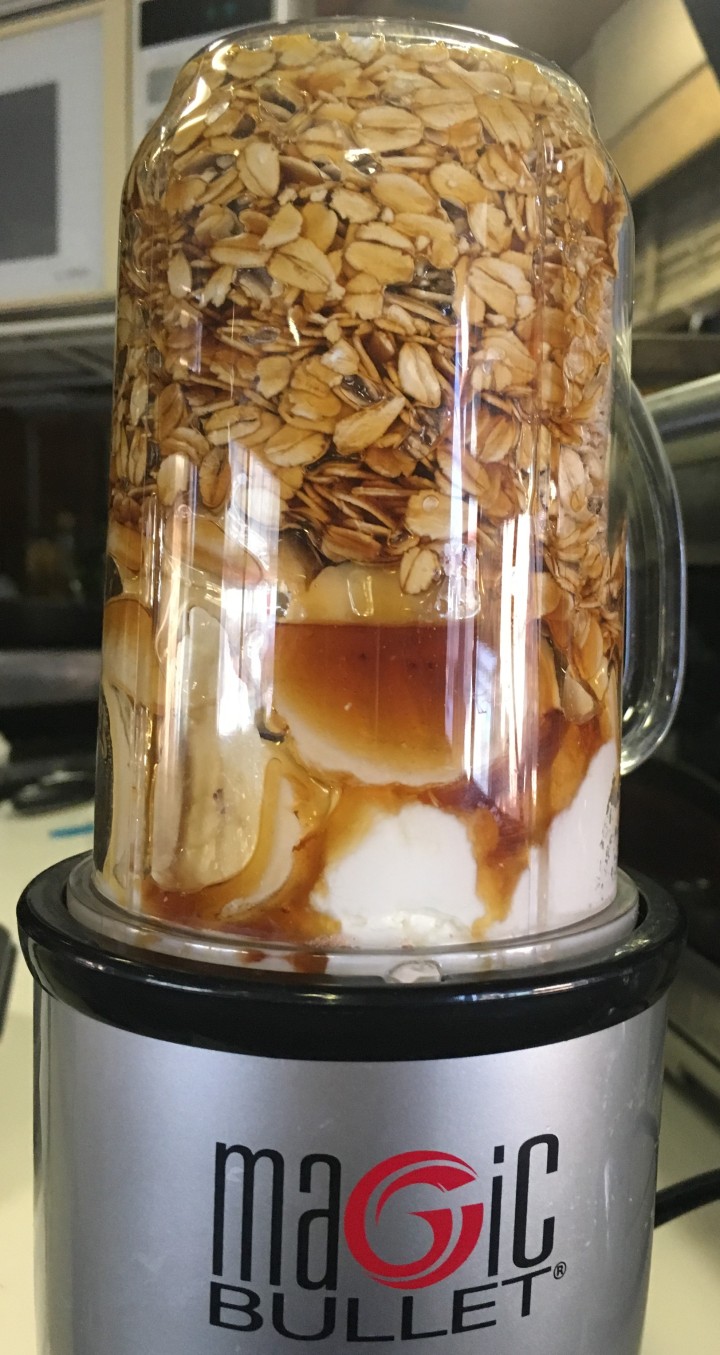 After pouring the appropriate amount of batter into paper liners in my jumbo muffin tin, I topped two each with coconut, chocolate chips with cinnamon, and then blueberries and small chunks of strawberries. While the recipe calls for them to cook at 400 degrees for 12 minutes or until a toothpick comes out clean, I baked them for about 20 minutes because they were bigger than the standard muffin.

The banana flavor is noticeable so if you’re not a fan of banana, you might try a different recipe. However, the banana scientifically (or magically) adds some sweetness and rise to the batter. Maybe that’s why they’re called Magical Blender Muffins.

If I would’ve known how delicious they were going to be, I wouldn’t have halved the recipe. My justification for devouring the muffins throughout the day was, “Hey! These are almost just like our bowls of oatmeal we eat every morning!” They were so tasty that it might be a good thing that my large blender is still packed away in storage.

Found at www.cookinglight.com, these Magical Blender Muffins are a new staple for us. Email johnskrysta@gmail.com with questions or comments.

Preheat oven to 400°. Place 12 pieces of parchment paper or muffin-cup liners in muffin cups, or spray tin with cooking spray.

Throw all of the ingredients in the blender; blend until smooth and creamy, about 1-2 minutes.

Divide batter evenly among prepared muffin cups. Sprinkle with toppings of your choice.

Bake at 400° for 15 minutes or until a toothpick inserted in center comes out clean. Cool muffins in pan 5 minutes. Remove from pan; cool completely on a wire rack. 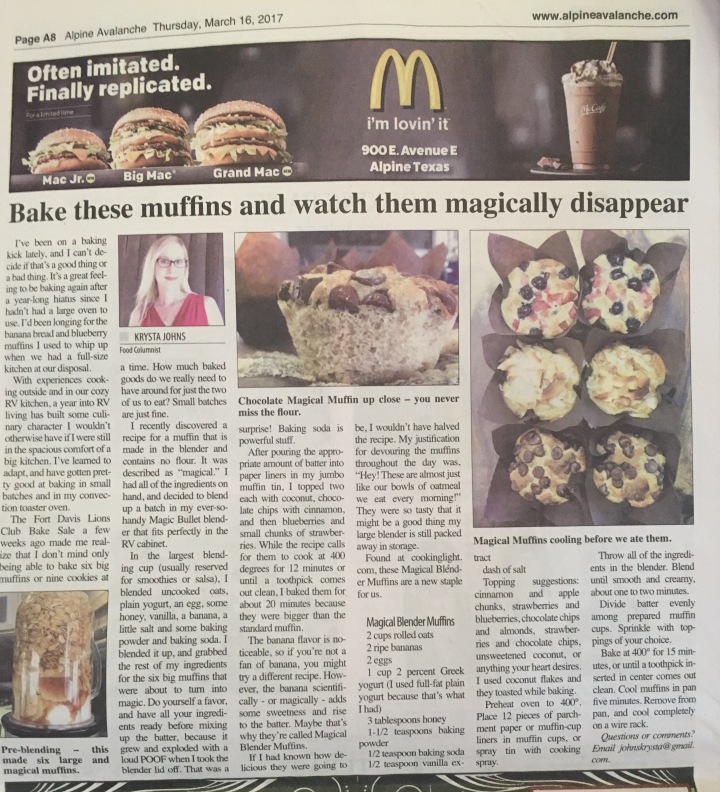