Our most recent Sunday drive took us down south to Presidio, on a sunny and perfect West Texas day. This cruise, we decided to take a road we’d never been on before – the Pinto Canyon Road.

Having read reviews, watched videos and heard folks talk about how a high clearance vehicle was a must (preferably one with four-wheel drive), we opted to take the pick-up truck and bring along our trusty wench, just in case we got somewhere and needed a little help getting out.

The Pinto Canyon Road, also known as Ranch Road 2810, runs from Marfa to Ruidoso. It’s a back-cut to the Chinati Hot Springs and by no means a short-cut. From Marfa, it’s partially paved but mostly dirt and rock road for travel. When I say partially paved, I mean only about 32 miles are paved, and that’s through the Marfa Plateau. Once you reach the Pinto Canyon, the following 28 miles is a rocky track. 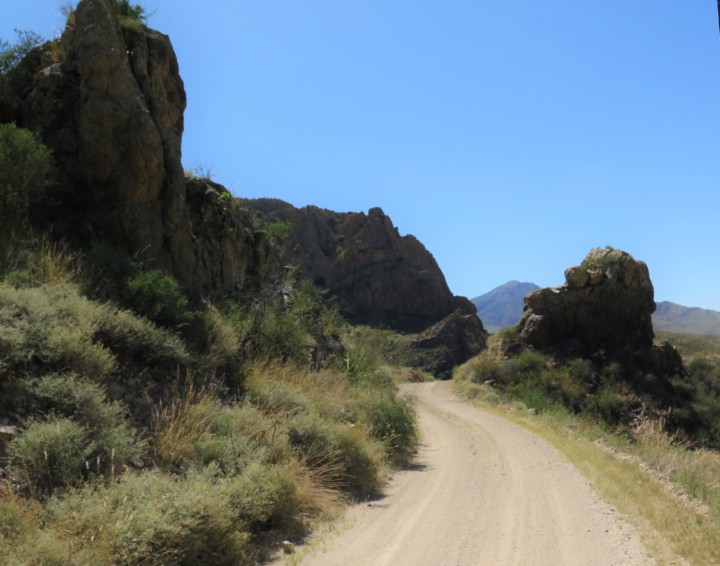 While it’s only about 60 miles, it takes close to two and a half hours and the terrain is unlike anything you’ll experience out on the open highway… Highway 17 that runs pretty much parallel to this road.

Much of our drive was spent under 10 miles per hour, partly to take in the vast beauty that surrounded us and partly because we were driving downhill on a narrow one-laner with the possibility of oncoming traffic.

It was funny to think that we were driving pretty much parallel to Highway 17, and on the opposite side of Chinati Peak, from what we were used to seeing. 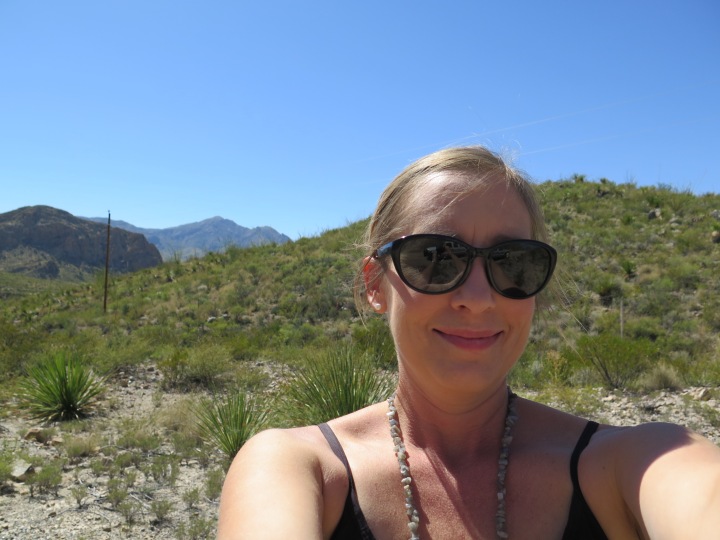 I managed to get photos of caves in a mountain face that made me imagine prehistoric people were living there. When we got nearly to Ruidoso, there were steep canyons with ledges beneath the grassy surfaces that housed cave openings and made me feel like we were looking at the Gila Cliff Dwellings in New Mexico or any of the Colorado Mesa Verde high-rise earthen homes of hundreds and thousands of years ago.

We saw evidence of past mining, and knowing the once-famous silver-mining town of Shafter was just over the mountains from where we were, wondered if there was any silver in them there hills. Adobe ruins were tucked along the roadside as well. As remote and isolated as the drive was, it was previously a thriving ranch community.

Driving the Pinto Canyon Road was spectacular. Aside from the electrical lines here and there, it almost felt like we had stepped back to the time when folks might be painting on or carving into large rocks and cave walls. I kept my eyes open for wild burros, but only saw a coachwhip snake and a roadrunner.

The road to nowhere took us to Ruidoso, where my phone sent me a message that read, “Welcome to Mexico”, yet we were still on the Texas side of the Rio Grande. 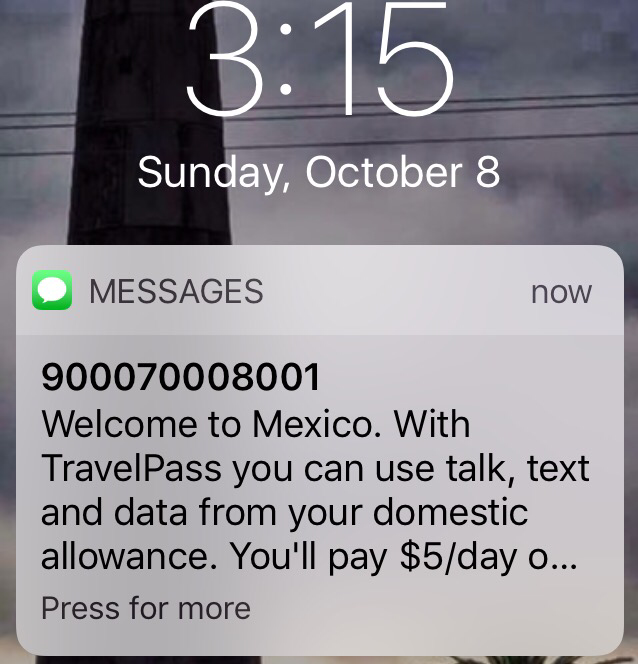 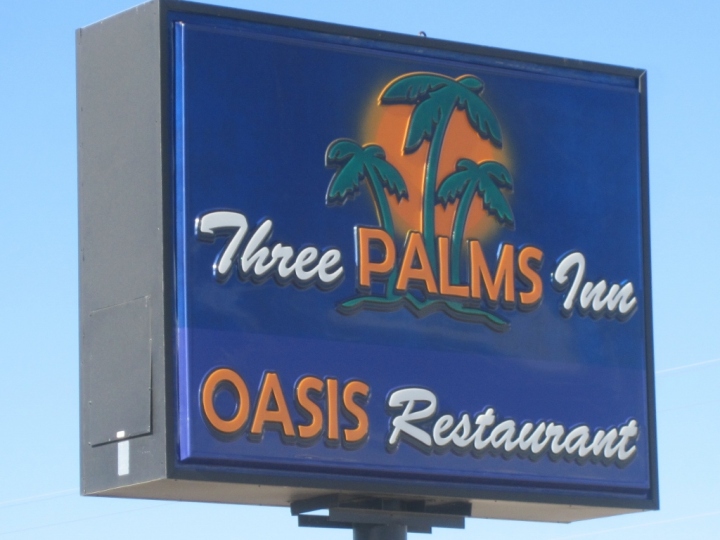 (Note: the first time we tried The Oasis was on the recommendation of my formerly-of-Fort-Davis-now-a-Waco-resident friend Ms. Daisy McCutcheon who told us the original owner/cook at the Oasis was the McCutcheon family cook back in the olden days on the ranch. My Spanish isn’t good enough anymore to ask when we go there, but I know Daisy wouldn’t steer me wrong!).

Why is is that Mexican restaurants often have the best burger you’ll ever eat?!

And incidentally, this is one of the cleanest restaurants I have ever been to… clean restrooms, no crumbs under the tables. It just smells like food. Two thumbs up. DANG, NOW I’M HUNGRY FOR BEEF ENCHILADAS OR A BACON CHEESEBURGER. 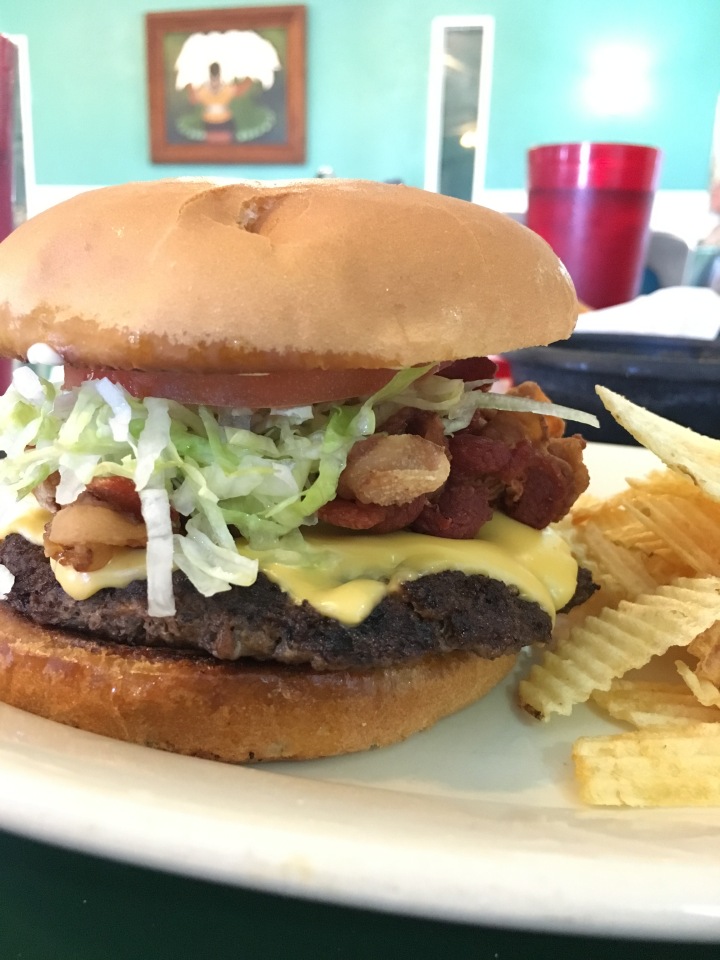 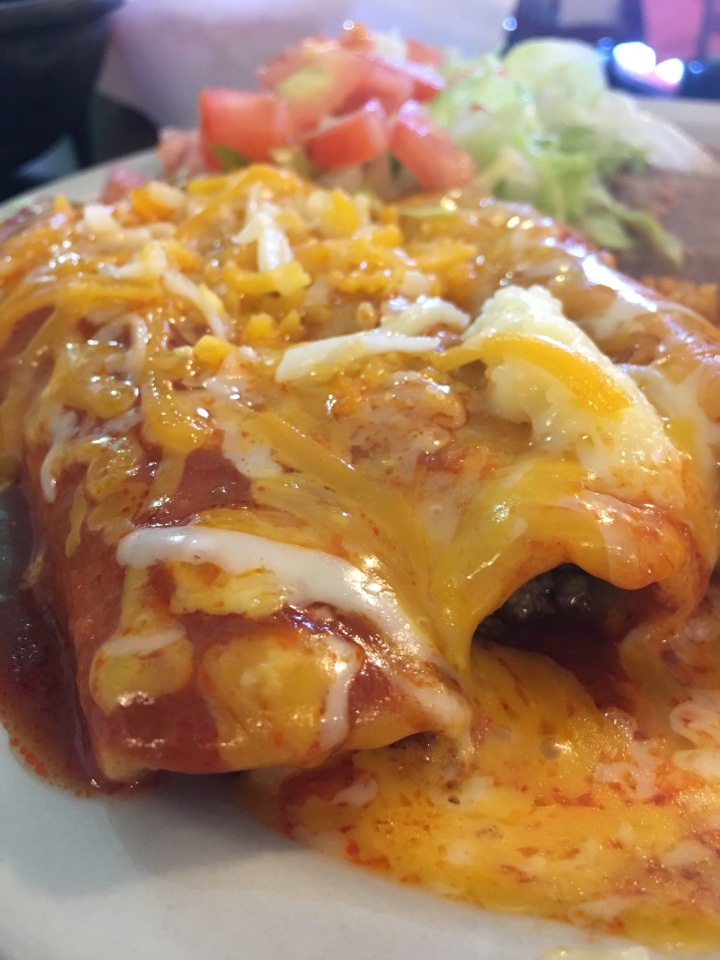 The Oasis was the perfect stop to refresh us before heading back up Highway 17, past the town of Shafter, where my husband’s great-uncle owned a saloon from the late 1800s until Prohibition in the 1920s. Great Uncle Albert Johns was also a Texas State Senator from Shafter, back in the olden days. He’s buried in Marfa, just 20 minutes from where we now live. We didn’t know about Uncle Albert when we moved here… again I ask, how cool is that?

Located at 1200 Erma Ave. in Presidio, The Oasis is open daily from 8 a.m. to 10 p.m. … just follow the billboard when you enter Presidio.

1 can (about 2 cups) chicken broth

12-14 corn tortillas (flour can be used if you prefer)

In a small skillet over medium heat, heat some cooking oil. Lightly fry the tortillas just until soft. Do not crisp. Drain on a paper towel-lined plate. Repeat until all the tortillas have been fried.

Heat oven to 375 degrees. Spray a 9×13 baking dish with cooking spray. Mix cooked ground beef and onions with ¾ c. enchilada sauce and 1 c. of cheese. Spoon approximately ¼ c. filling into each tortilla, roll up and place seam side down into baking dish.

Cover with foil for more moist enchiladas. Remain in final 5 minutes of baking.

Printed with the permission of the Alpine Avalanche newspaper