Printed with the permission of the Alpine Avalanche newspaper – Aug. 31, 2017 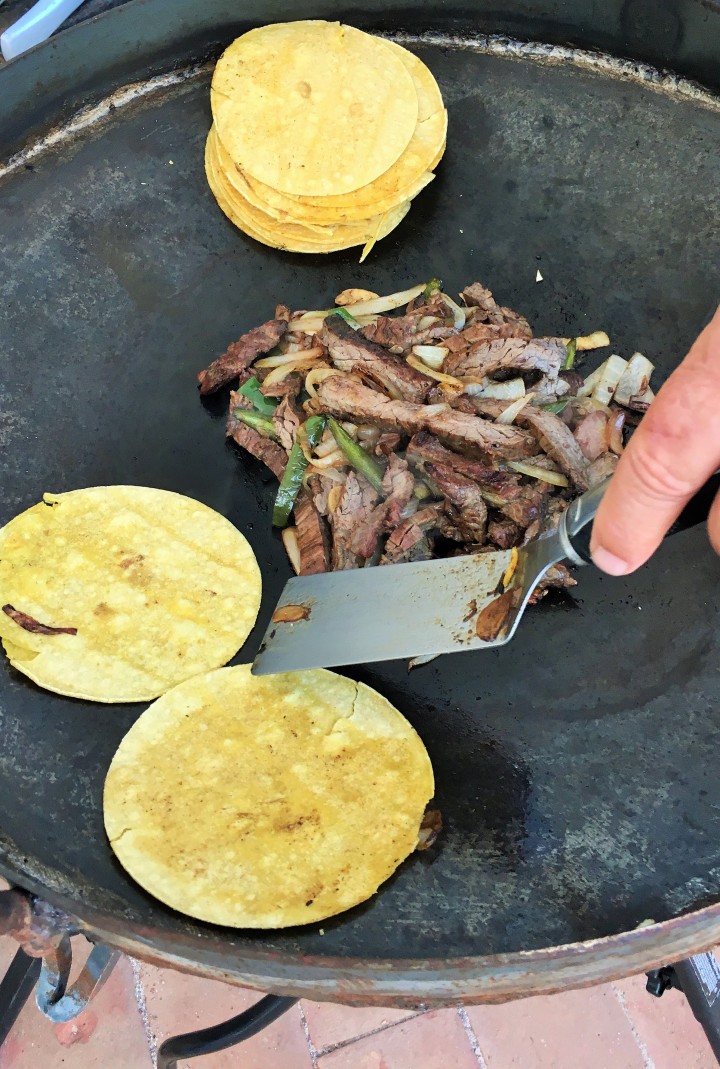 Alternate headline after the fact:

About a month ago, my husband spotted a cooking device for sale on one of our local internet sales sites, and we promptly made the 20-minute drive down to Marfa to pick it up. I really had no idea what we were buying until we actually got it, but it’s something he’s wanted for a long time. A discada.

Ranchers and seasoned outdoor cooks might be reading this and yawning, but y’all bear with me – this 7th-generation-Texan-gringa just learned something new.

A discada, also known as a disco or “cowboy wok,” is nothing new. As a matter of fact, it’s been in use in Northern Mexico and spread out to these parts ever since someone got the idea to heat up an agricultural plow disc over a fire and cook some meat on it. It’s typically made of steel, is concave and resembles a Chinese wok.

Discos are thicker than woks, and while woks are known for quickly cooking food at high temperatures, discos can maintain both high and lower temperatures to simultaneously prepare different items for your meal. The disco usually has either handles or is welded to a tripod so that you can cook over an open fire, or in our case, a propane burner.

The word “discada” means a couple things here. It refers to the modified tractor plow disc you are cooking your meal in, and the entire meal itself. To prepare and serve a discada, there are traditional methods to follow. There are many steps for cooking individual items in a specific order (bacon, chiles, onions, other vegetables, meat, tortillas) that are added to the disco, cooked, spread out along the cooking surface, then mixed together and served in tortillas that were also warmed on the disco. 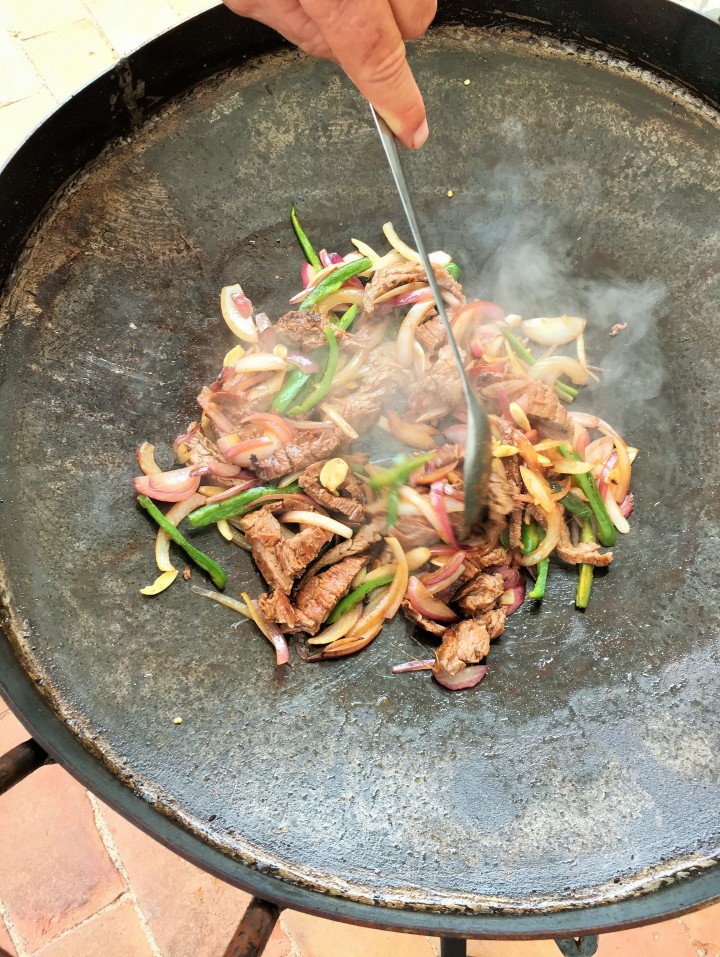 Or, you can keep it simple and cook whatever meat you have with onions, peppers and tomatoes and serve it in tortillas. Add some guacamole and sour cream if you want, or just squeeze some fresh lime juice over it and enjoy. This process creates flavors you just can’t get by throwing stuff on the grill or in a skillet.

Our disco was welded into being by a fella down in Marfa. It’s incredibly sturdy and well-made. One of the things my husband really liked was that it has a two-inch lip which makes it deeper than any others he’s had his eye on. To season his new disco, he fried some pork belly in it since I was out of bacon – the oil from the meat was good for breaking in the disco. The fat keeps foods from sticking to the surface. 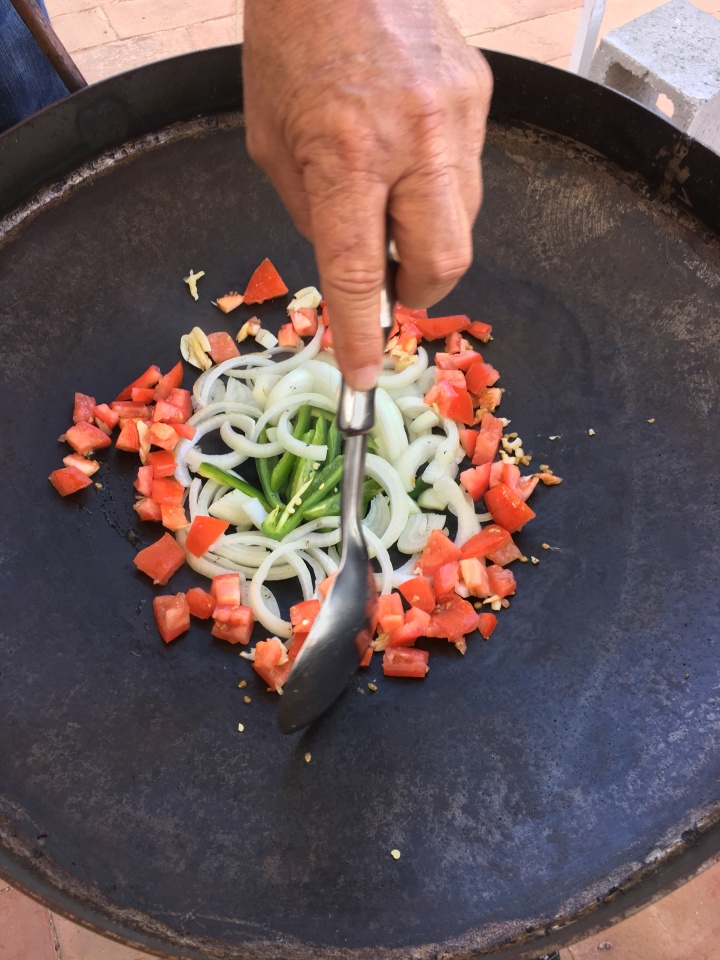 Breaking in our cowboy wok, we decided to make beef fajitas. I marinated the skirt steak overnight and all day, and he cooked it in the pork-belly-greased disco with sliced jalapenos and onions. He heated corn tortillas, and we topped it with guacamole, sour cream and salsa. These were quite possibly the best fajitas we have ever made… close to the best I’ve ever eaten.

Our second time, we made chicken fajitas with all the same toppings. So delicious that I can’t even properly describe it. I am thrilled with our latest addition to the outdoor kitchen collection, and not just because he’s in charge of it instead of me.  I still prep everything 😉 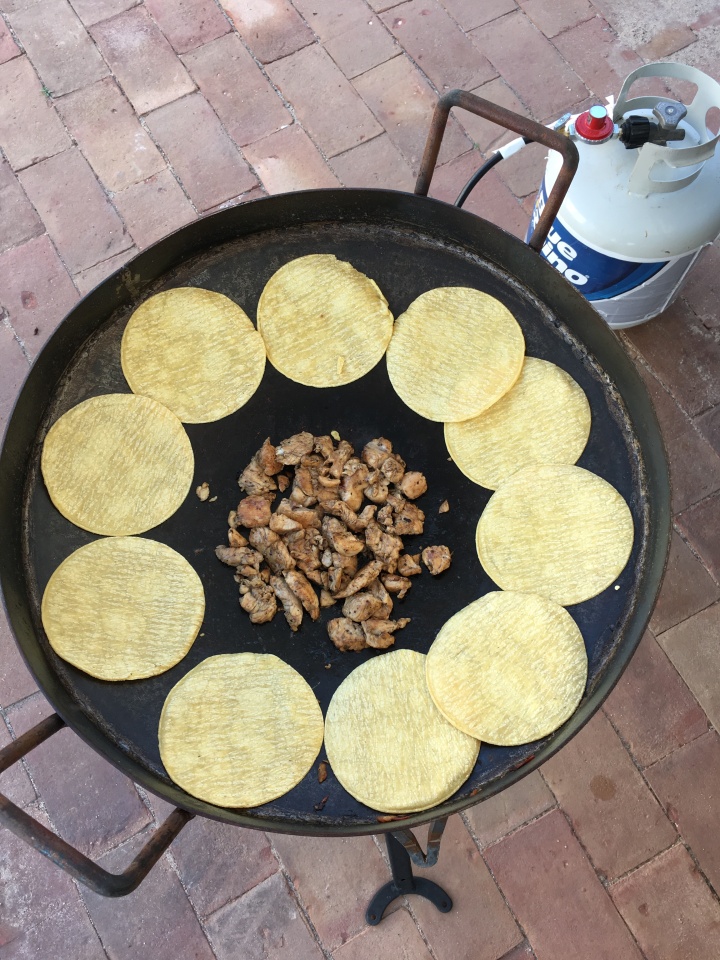 Flour or corn tortillas – you choose

Coat chicken breast with salt and pepper. Heat oil in the cooking disk over medium-high heat. Add the peppers and onions and sauté 5-10 minutes. Remove from heat, cover, and keep warm. Add a little more oil if needed and add seasoned chicken to the cooking disk. Cook over medium heat 3 minutes before turning to let the chicken breasts get a little crispy on the edges and to prevent them from tearing. Turn and toss chicken on the disk until cooked through. When chicken is almost cooked through, cut chicken into serving sized strips with a knife. Move chicken to the outer edges of the disk, and add stewed tomatoes to the disk. Sauté tomatoes 1 minute, and then add vegetables back to the disk to heat through. Squeeze lime juice over the whole dish, and toss vegetables and meat together to serve. Lay flour (or corn) tortillas over the fajita mixture on the disk to warm.