Printed with the permission of the Alpine Avalanche – July 20, 2017

I took this photo last year near the Fort Davis Presbyterian Church.

A couple months ago, we decided that we wanted to plant prickly pear cactuses as one of our landscape components. They seem to thrive everywhere in the Trans-Pecos.

They have large, colorful blossoms that are yellow, pink, red or purple and grow from the tip of cactus pads, which later ripen into delicious reddish-purple fruit. Many varieties of prickly pear cactus grow wild throughout the deserts of the Southwest.

We wanted ours to fill a blank dirt space between a newly constructed and stuccoed wall and a heavily-traveled sidewalk. We knew we only wanted the thornless variety… and they aren’t as easy to find as the thorn-filled cacti, which are literally everywhere out here. You probably can’t throw a rock without hitting one of those thorny plants.

We’d just missed the native cactus sale at the Chihuahuan Desert Research Institute as well as the native plant sale in Alpine. I could order pads online but wanted bigger, more established plants for instant impact.

Asking around, we were ultimately gifted with potted thornless prickly pear from our friends Beth and Larry Francell, as well as cuttings from an enormous plant in the front yard of our friends Debbie and Mike Murphy.

We dug holes, stuck the plants in, filled them with soil and watered them deeply for a few days. Before we knew it, the shock of relocation wore off the plants, the pads swelled and new little buds started to pop up all over the cactus pads! Just a couple months into this landscaping adventure, the plants have all more than doubled in size, have bloomed beautiful yellow flowers, and are filling with fruit. Talk about hardy plants.

“Nopal” is Spanish for cactus. It has been a staple food for Native Americans for centuries. In Mexican and Mexican-American cultures, nopal (specifically prickly pear) is part of the diet – but only the young plants are eaten because the older they get the tougher they are. 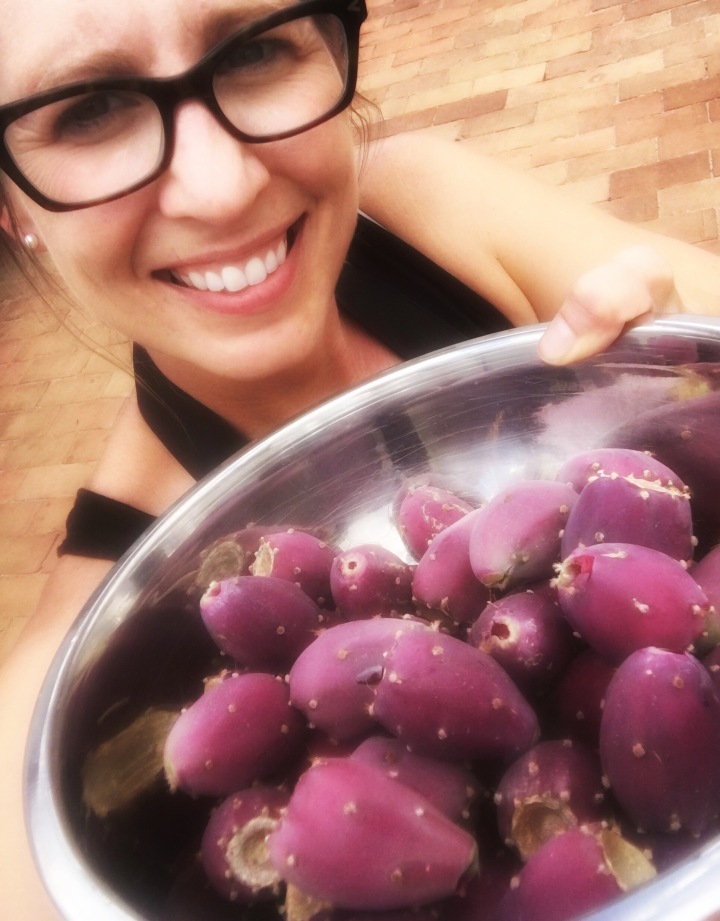 The prickly pear juice from the fruit (which are called “tunas”) is used commonly in jellies, candies and the famous prickly pear margarita.

A tuna, above, and a prickly pear margarita below.

Before I had my own prickly pear garden, I was unaware of the health benefits and history of this amazing plant. Sure, I’d eaten Nopalito Salad many times at a favorite old San Antonio restaurant, and drank my fair share of bright pink prickly pear margaritas, but I didn’t fully appreciate the cactus and all it has to offer.

Beware that even if these cactuses aren’t covered with those beastly thorns doesn’t mean they’re without them. They still live up to the name of prickly pear with teeny little thorns you can’t see, but certainly can feel.

Wear gloves if ever you handle them. Take my advice – I managed to get two little thorns right under my fingernail and luckily, was able to tweeze them out quickly. If you’re picking the tunas, use tongs and wear gloves, and be extra careful to remove all the thorns before using them for food or beverages. And, be sure you’re not trespassing if you’re picking tunas from cactuses other than in the right-of-ways. 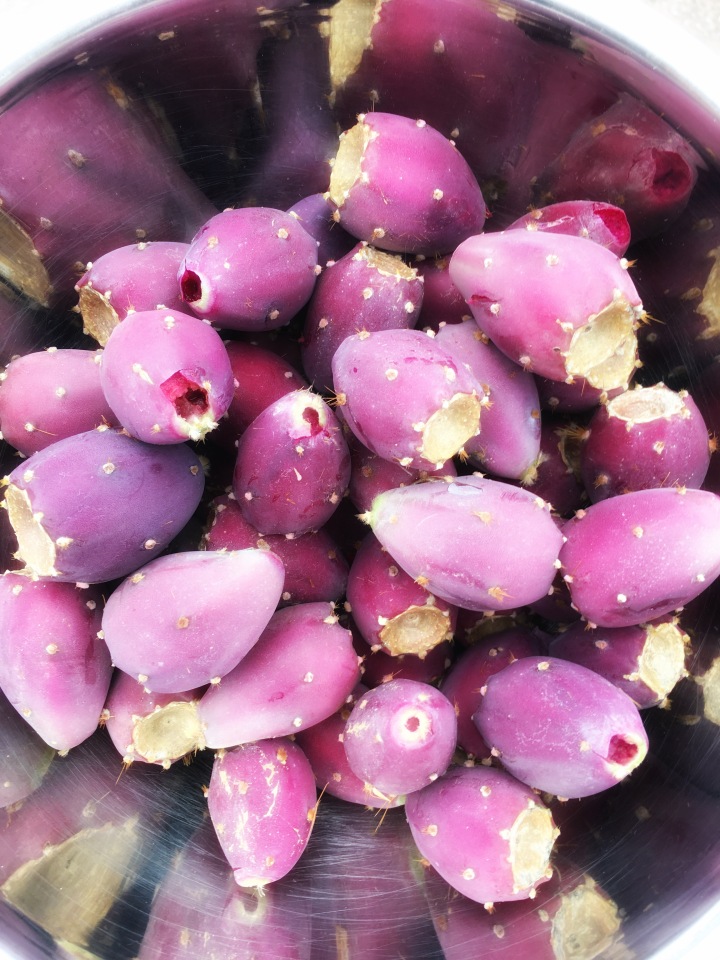 My most recent roadside harvest of tunas.

Someone painted happy faces on prickly pear cactuses on the interstate in Balmorhea, Texas a few years ago. It made me laugh out loud when I saw the artwork.

Shake all ingredients together in a covered jar. Makes about 1 cup. This pretty pink dressing is thin like an oil and vinegar dressing, but lower in calories. Good on fruit salads and tossed green salads.

Chop orange peel and pulp. Add 4 cups water to lemon and orange. Let stand 12 to 18 hours in a cool place. Boil until peel is tender. Cool. Measure lemon, orange and water in which cooked. Add chopped prickly pears and 1 cup of sugar for each cup of combined pear, lemon, orange and water. Boil to the jellying point. Pour, boiling hot, into hot jars. Seal at once.