A handful of years ago, my husband and I decided to eliminate grass from our suburban Hill Country backyard and grow food, not flowers. Our yard was small – although large enough to be a hassle to mow – so we added paved walkways and raised garden beds, utilizing the hugelkultur method.

Hugelkultur has been used in Germany for centuries, and remnants of hügelkultur fields can be found all of the Hill Country where early Germans settlers lived. Every notice a field that looked terraced? Chances are good it was hugelkultur. It involved layers of fallen trees covered with smaller twigs and a few inches of dirt. Over time, the wood rots and creates ideal growing conditions.

For our beds, my husband dug trenches approximately 4 feet by 8 feet, filled them with as much woody debris as he could find, and covered the debris with soil. We watered it regularly to create a bog under the soil, breaking down the wood. Not only does it use up limbs, branches and twigs that weren’t suitable for any other use, it builds the soil’s fertility, improves drainage and helps retain moisture in your garden bed.

We grew many things with great success in our raised beds, but my favorite crop was organic corn.

Some records indicate that corn has been grown for over 5600 years by Mayan and Aztec tribes in Mexico. When the first Pilgrims landed at Plymouth Rock, many of them might’ve died from starvation had the Native Indians not shared corn with them. They also taught the Pilgrims not only how to grow corn plants, but how to turn that corn into bread, pudding, soup and fried corn cakes.

Imagine my corn-growing-newbie horror when we picked our first few ears of organic corn, peeled back the husk and silk, and found big blobs of fungus on them… I just knew they were ruined, and that some icky malady had befallen our backyard paradise. 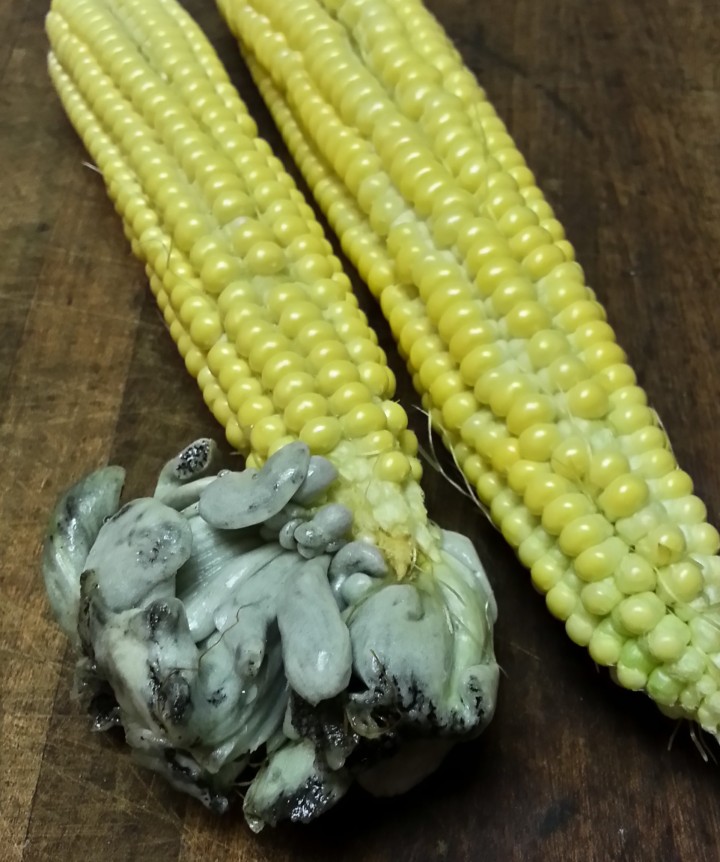 My well-traveled husband assured me that the fungus was actually a good thing. It’s a naturally occurring fungus that grows on corn, and in Mexico, it’s considered a delicacy. You can also find this fungus canned, jarred, frozen and fresh, depending on where you’re shopping.

After some research, I found that this fungus was often referred to as “corn smut,” “corn mushroom,” “Mexican truffle,” and “Huitlacoche” (pronounced WHEE-tala-coach-A). The name huitlacoche is Nahuatl, the language of the Aztecs that is still spoken by more than a million people in Central Mexico. Corn (maize), was a staple in the Aztecs’ diet, and they used the spongy corn fungus mainly in tamales and stews. 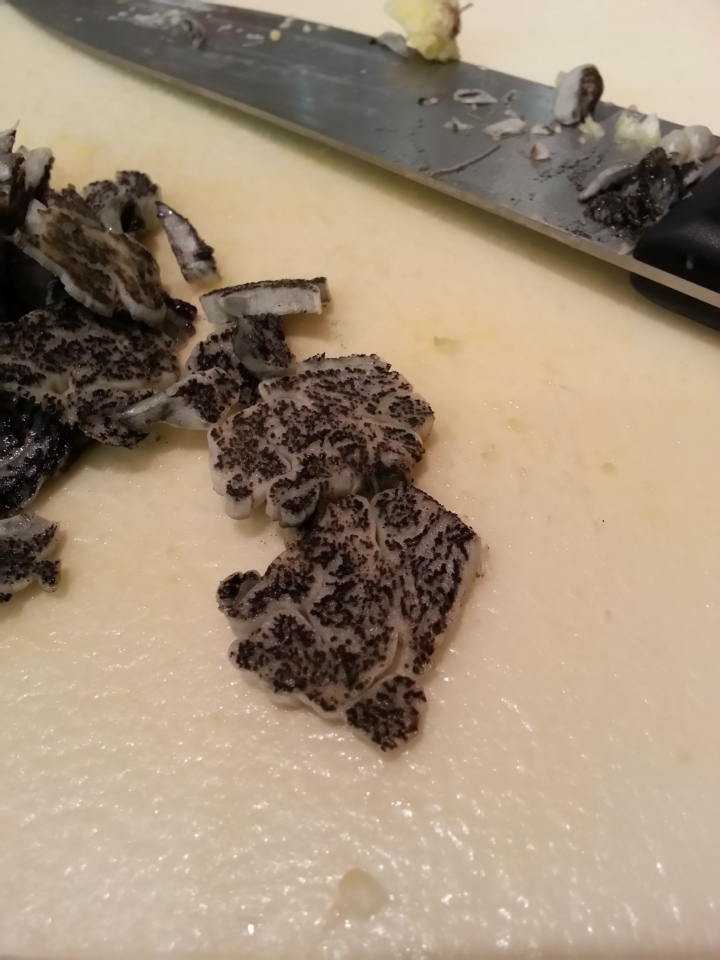 Huitlacoche growth follows the corn season, usually appearing during rainy times. The fungus grows typically between May and November, and ours was smack dab in the middle of summer.

After chopping our huitlacoche, sautéing it with butter, garlic, onion and some fresh corn kernels and enjoying it on homemade corn tortillas, I was hooked. Earthy with a touch of sweetness, it was a flavor I’d never experienced in a “mushroom” before. The panic that once accompanied peeling back the husk and finding a weird growth on a cob was replaced with disappointment when the ear was perfect and blemish-free.

The other day at Porter’s, I ran across the store to grab something while my husband perused the produce department. When I returned, he had a bushel of sweet corn in the shopping cart. A bushel typically has about 60-70 ears of corn in it. Too good of a deal to pass up at $5 for the entire bushel of sweet corn from Hondo, TX, we’ve been eating a lot of corn and haven’t even made a dent.

I keep hoping to peel back a husk and find some fungus.

Huitlacoche
(If you’re lucky enough to encounter huitlacoche, grab it and try this recipe – you can serve it in tortillas as tacos, in crepes, or as quesadilla filling)
3 tablespoons olive oil
2 tablespoons white onions, peeled and minced
2 small garlic cloves, peeled and minced
4 poblano chiles, seeded and cut into strips
1-1/2 pounds Huitlacoche (about 6 cups)
salt, to taste

Heat the oil in a frying pan. Add the onion and garlic and fry gently until translucent – about 3 minutes. Add the poblano strips and fry for an additional minute. Add the huitlacoche and salt, cover the pan and cook over medium heat, shaking the pan from time to time for about 15 minutes. The fungus should be tender, retaining some moisture, but not soft and mushy. 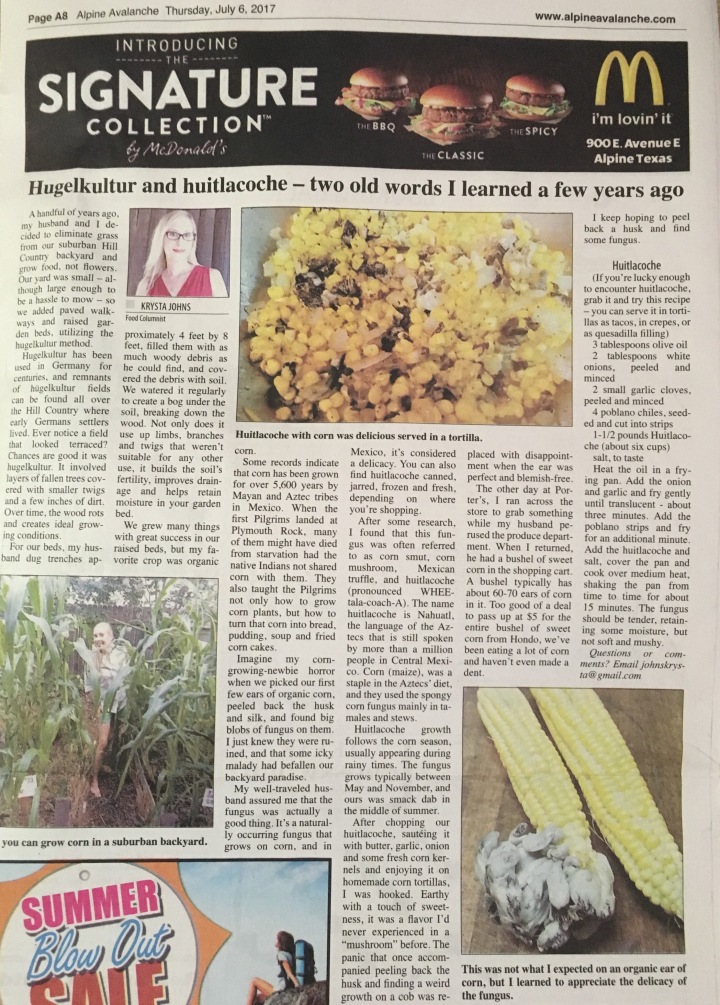