Printed with the permission of The Alpine Avalanche

Last weekend, the Hammerfest Cycling Race came to Fort Davis. It was my second time to experience it as a Lions Club member, helping with different positions for the USA Cycling sanctioned stage race through the Davis Mountains. 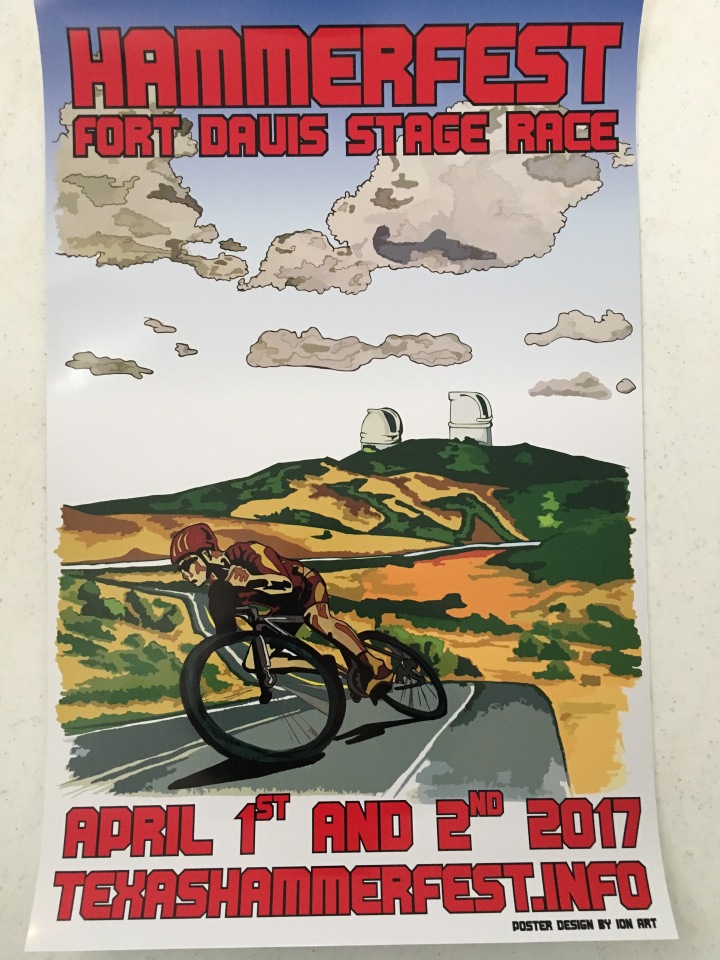 I don’t know much about cycling. I ride a single-speed Schwinn with a basket on it when the tires aren’t too low. But I know the racers were riding for prize money and state ranking.

Peri Mashburn, the race promoter, is a friend and neighbor so we couldn’t not help her out. Lions were happy to serve as drivers, radio operators, photographers and general assistance for this memorable race.

Peri provides lunch and dinner for the race officials and helpers, and this year, she made several large pans of lasagna and two large slow-cookers, each filled with shredded chicken or pulled pork for sandwiches. With big green salads and dozens of homemade cookies and cake for dessert, she made feeding a crowd look easy.

During Friday’s registration, and with the help of my visiting daughter, I set up a table in the Hotel Limpia’s Ballroom and filled it with baked goods and a 42-cup coffeemaker. The Fort Davis Lions baked muffins and breakfast breads, and they truly outdid themselves in both quality and quantity of delicious offerings. I put a donation jar on the table and the cyclists outdid themselves with generosity. We also collected nine pairs of used eyeglasses for the Texas Lions Eyeglass Recycling Center. 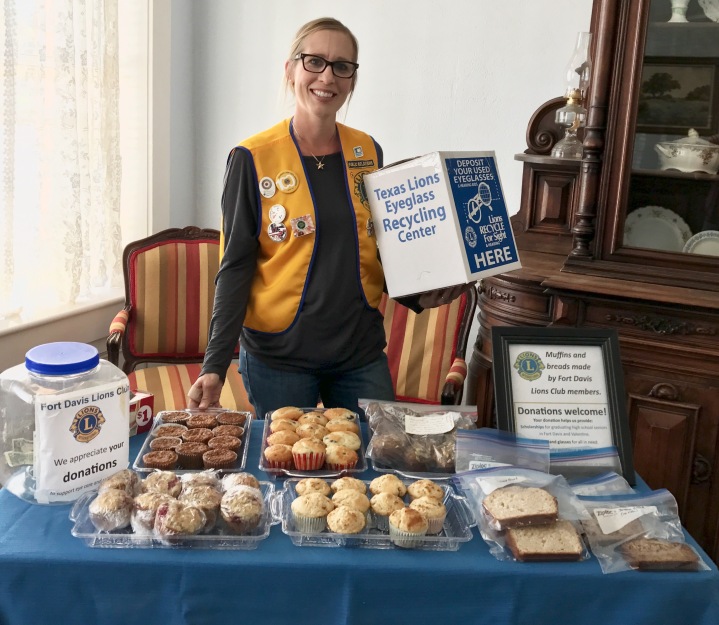 Saturday was filled with races from the Hotel Limpia’s parking lot up to the McDonald Observatory, and out to the Crow’s Nest subdivision on Highway 166. Cyclists took advantage of the warm and sunny, picture-perfect, Chamber of Commerce West Texas weather for extra rides around town when they weren’t racing. 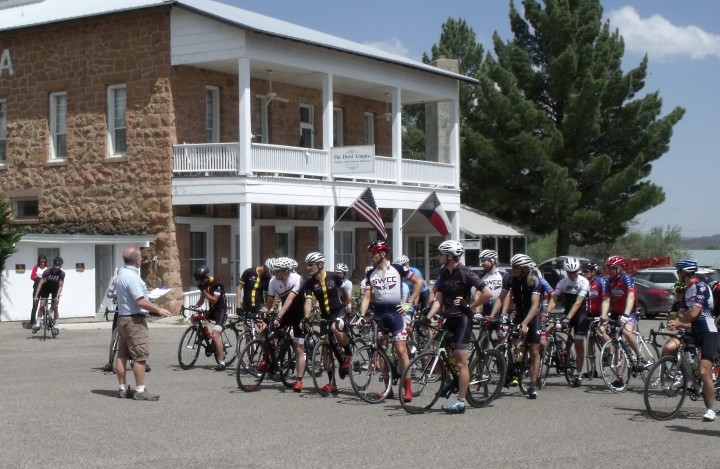 Sunday, the first racers left at 8 a.m. to ride the Scenic Loop, followed by groups heading out to the Observatory and back. After moving the baked goods and industrial-sized coffee maker to Peri’s historic adobe house in downtown Fort Davis near the finish line, we decided to go check on things up the mountain and take pictures of riders in the fog that was rolling in. 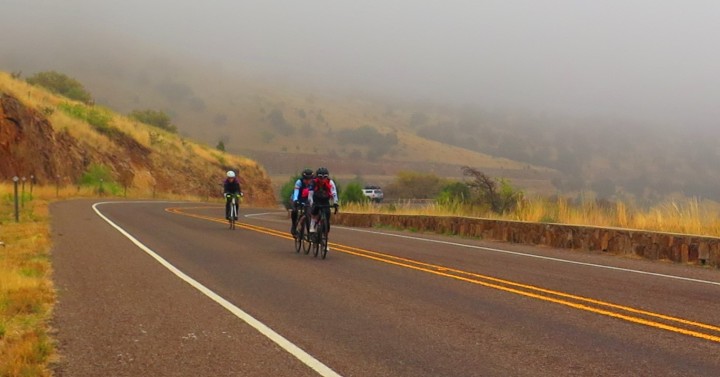 By the time we made it up to the Observatory, the temperature was 36 degrees and it began sleeting. What happened to the mid-50s we’d left in town? It was a far cry from the perfect weather of the day before. Actually, the complete opposite of it because it was also raining. Every single rider was wearing standard clothing made of spandex. Spandex and sleet don’t pair well.

We’d heard that some racers stopped and needed rides back to town, because farther around the Scenic Loop, it was snowing. No one was prepared for this weather.

We ran back to the house and rounded up every heater, towel and blanket we could find to warm things up for the nearly-frozen cyclists when they returned. We turned the oven on, and opened the oven door to fill the kitchen with more warmth. We had coffee and muffins and warm towels and blankets and clean t-shirts waiting for the ones that came inside the house after returning from the frozen tundra a few miles up the road.

We soon found out the race had been called because of the weather – and that every car that was available was out picking up shivering, wet racers on the roads where they’d abandoned their bikes for the safety of a warm vehicle. You know it’s a dire situation for a cyclist to abandon their bike. After dropping off racers, the drivers went back for the bikes and tires that were left on the side of the road.

There were just under 100 racers and they were all inside the 101-year-old adobe at some point in the day. Many were able to enjoy the lasagna, shredded chicken and pulled pork sandwiches Peri had thought ahead to prepare. Not a crumb from a muffin was left, and everyone enjoyed the Big Bend Coffee Roasters brew. 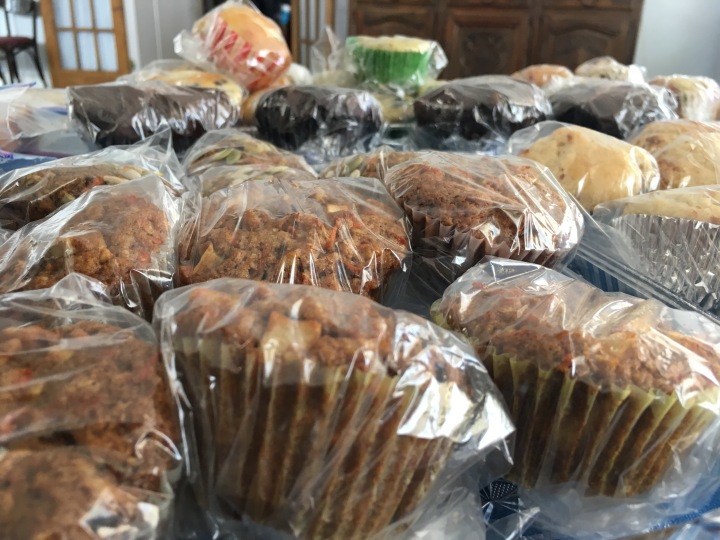 While there was no way she was going to divulge her secret lasagna recipe, I managed to get the pulled pork recipe from Peri. Even if you’re not feeding a crowd, this pulled pork was just perfect for a sandwich with tangy slaw on top, and even better leftover. It tastes like it took much more effort than it did. 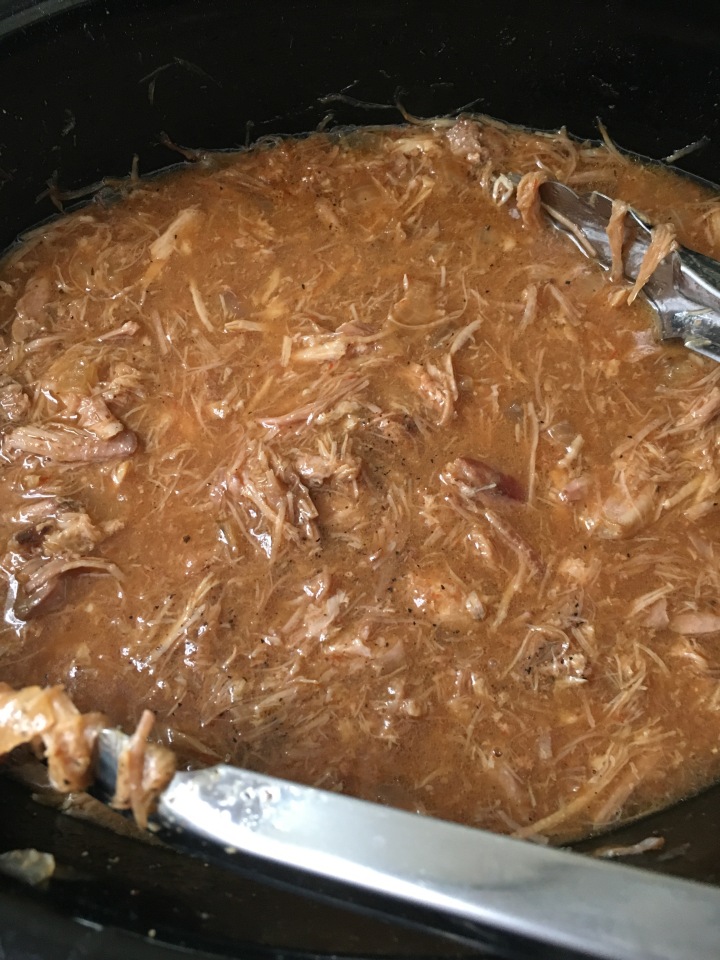 Trim pork of any excess fat. Scatter onion over bottom of slow cooker and place pork on top. Add broth, cover and cook on low until very tender, about 8 hours. Remove meat and let cool.

When cool enough to handle, pull meat into thin shreds, removing all fat and gristle. Skim excess fat from liquid in slow cooker.

Return pulled pork to slow cooker and stir in barbecue sauce, mustard, honey and soy sauce. Season with salt and pepper. Cook for 1 hour longer on low. If desired, serve with coleslaw on hamburger buns. 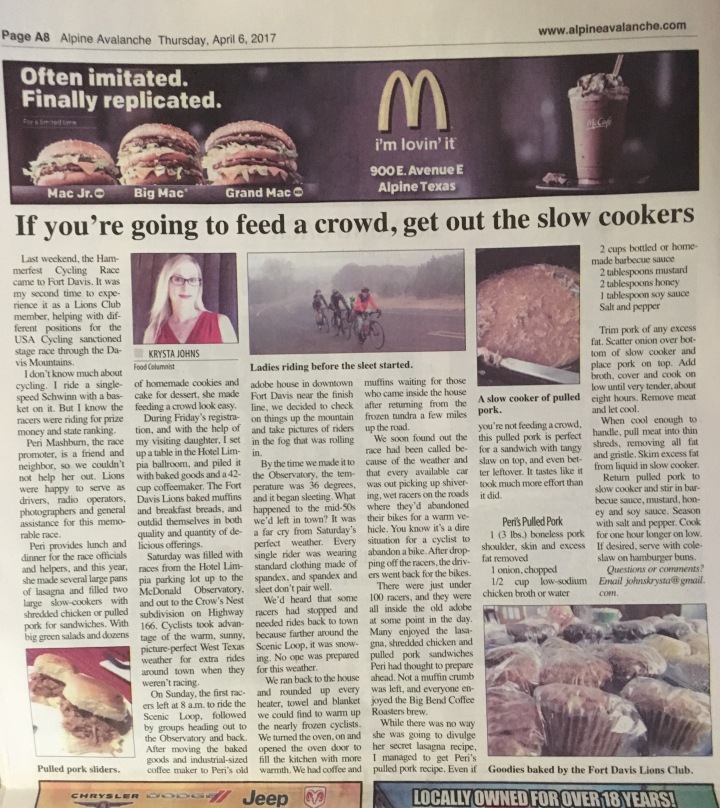