(PRINTED WITH THE PERMISSION OF THE ALPINE AVALANCHE)

UPDATE: This restaurant is now closed.

The other day, my husband and I happened to be in Van Horn at lunch time and decided to try something new. Double DD’s Barbecue, a restaurant in what appears to have once been a gas station on the old highway, was an unexpected surprise.

David and Rose Morales opened Double DD’s in May of this year. His sister Sandra runs the kitchen and nieces Bernadette and Lasette take care of customers out front.

Our waitress Bernadette was still excited from taking her two young sons to watch the rocket launch in Van Horn the day before. I’ll admit, I was kind of clueless about it but my husband knew exactly what she was talking about.

Bernadette grabbed her iPad and pulled up the eight-minute rocket video for us to watch while we were waiting for our food. She said her son even got to meet the Blue Origin owner Jeff Bezos, (who also owns Amazon and the Washington Post), and after shaking his hand, told her, “I’m never gonna wash my hand again!” to which she replied, “You better wash your hands right now!” Moms will be moms.

If you’re not familiar with the rockets in Van Horn (like me), check out the website at http://www.blueorigin.com. From their website: “On October 5, 2016, New Shepard performed an in-flight test of the capsule’s full-envelope escape system, designed to quickly propel the crew capsule to safety if a problem is detected with the booster. At T+0:45 and 16,053 feet (4,893 meters), the capsule separated and the escape motor fired, pushing the capsule safely away from the booster. Reaching an apogee of 23,269 feet (7,092 meters), the capsule then descended under parachutes to a gentle landing on the desert floor. After the capsule escape, the booster continued its ascent, reaching an apogee of 307,458 feet (93,713 meters). At T+7:29, the booster executed a controlled, vertical landing back at the West Texas Launch Site, completing its fifth and final mission.”

No wonder Bernadette was so excited.

We both ordered the lunch special that was a sausage and brisket plate served with two sides. He got potato salad and beans, and I got potato salad and coleslaw. As usual, I took part of mine to go, and the portions were just right. If I’d known how much I was going to enjoy the coleslaw, I would’ve gotten two coleslaws. That stuff was good! When I figured out the unusual flavor, I asked Bernadette and she confirmed it for me… pineapple was the secret in their coleslaw.

If you’re ever in Van Horn and need some really good barbecue, check out Double DD’s. They also have an extensive breakfast menu that included lots of my favorite things. Located at 1809 W. Broadway in Van Horn and also on Facebook, do yourself a favor and check them out! 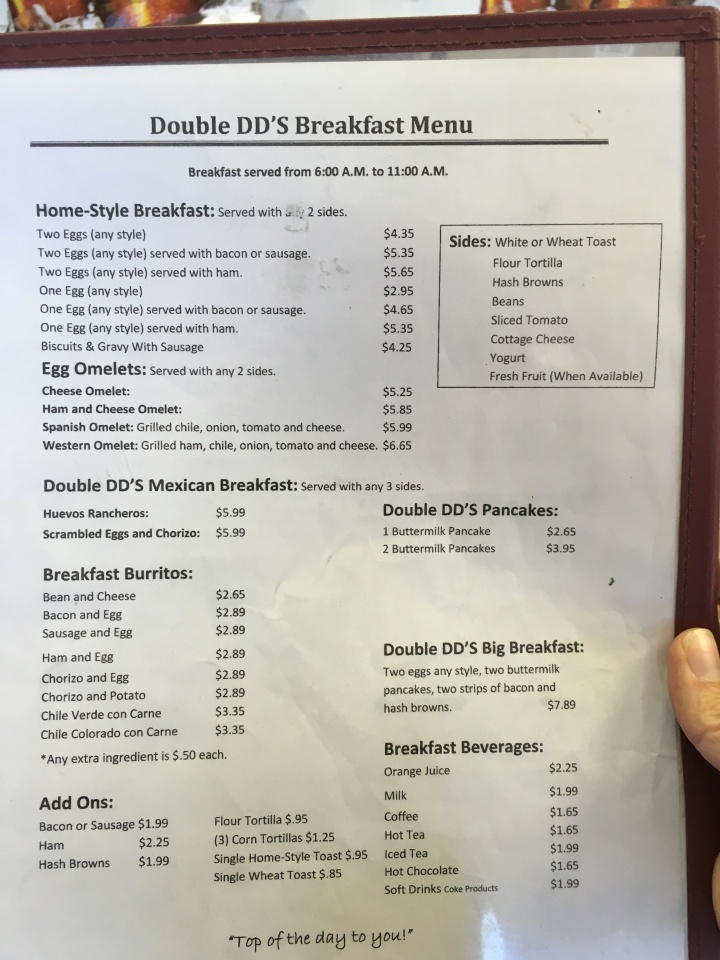