((PRINTED WITH THE PERMISSION OF THE ALPINE AVALANCHE))

How can you drive past a place with that sign out front, and not stop?

When we first started spending every other weekend in Fort Davis a couple years ago, our Sunday drive back to the Hill Country usually included a stop at either Poco Mexico in Fort Davis, or Cueva de Oso (also known as Bear Den and The Cutest Restaurant in Balmorhea). We wanted to get one last fix of West Texas Mexican food before heading back to lower elevations. The drive from Fort Davis to Balmorhea is one of my favorite drives, and I always recommend that route to folks visiting the area.

After a good 18 minutes or so of winding through column rock formations on Highway 17, the landscape opens up at the majestic Wild Rose Pass and the terrain turns from mountains to farmland, fed by a series of canals connected to the San Solomon Springs. The springs feed 10,000 acres of area farmland, with 26 million gallons of water daily. That same spring fills the swimming pool of Balmorhea State Park, built by the Civilian Conservation Corps in the 1930s, and the 600-acre Lake Balmorhea with crystal clear, 74-degree water.

Mascalero Apache Indians were the original inhabitants of the area near the spring. The City of Balmorhea was established in 1906 by three land promoters – Balcom, Morrow, and Rhea – so no, the name “Balmorhea” does not translate into a Spanish or Apache word. I’ve always been fascinated with the oasis in the desert, with the many canals around town and the canal running right through town.

We recently had family visiting from out of town, and decided they needed to experience Cueva de Oso before we headed south to try to catch a glimpse of the Marfa Lights (which were clear and active that night). My husband orders the plate called “Two and Two”… two enchiladas and two tacos of your choice. He says it’s the perfect amount of food that is filling but doesn’t leave him stuffed. He orders two soft chicken tacos, and two cheese enchiladas with red sauce and an egg on top. Lately I’ve been branching out from my usual favorite of Tacos a la Parilla (steak tacos with sautéed jalapenos, onion and tomatoes) and most recently enjoyed the green chicken enchiladas. Our guests all loved their flat enchiladas – something they weren’t accustomed to eating. I’ll be ordering the green chicken enchiladas again.

Over the years, we’ve seen familiar faces from all over the area eating at Cueva de Oso. Besides Fort Davis folk making the picturesque drive, we met a couple from Alpine that typically calls in their order so that it’s ready when they get there. We’ve met a couple of Marfans there, too. Now that we’re locals, we still enjoy the drive to Balmorhea a couple times a month just to eat at the Cutest Restaurant in Balmorhea/Cueva de Oso/Bear Den.

Preheat oven to 350 degrees. Combine chicken, sour cream, soup, chilies, onion, and 3 cups of the cheese in a large bowl and mix well. Salt and pepper the mixture to taste. Grease an 8×8 baking pan. Sprinkle a bit of the saucy chicken mixture on the bottom of the pan, just enough to cover the pan. Put a layer of tortillas in the bottom of the pan. Spread on a layer of the chicken mixture about 1/2 inch thick.    Sprinkle on a thin layer of cheese. Repeat until pan is full, top with cheese. Cover pan with aluminum foil and bake for 30 minutes. Uncover and bake for 10 more minutes or until cheese starts to brown a little, but don’t let it burn. Let it stand for 10 minutes and then serve with your favorite salsa, chips and guacamole, or on its own.

Pictured below: Green Chicken Enchilada plate and the Two & Two plate with chicken soft tacos and enchiladas topped with a fried egg. 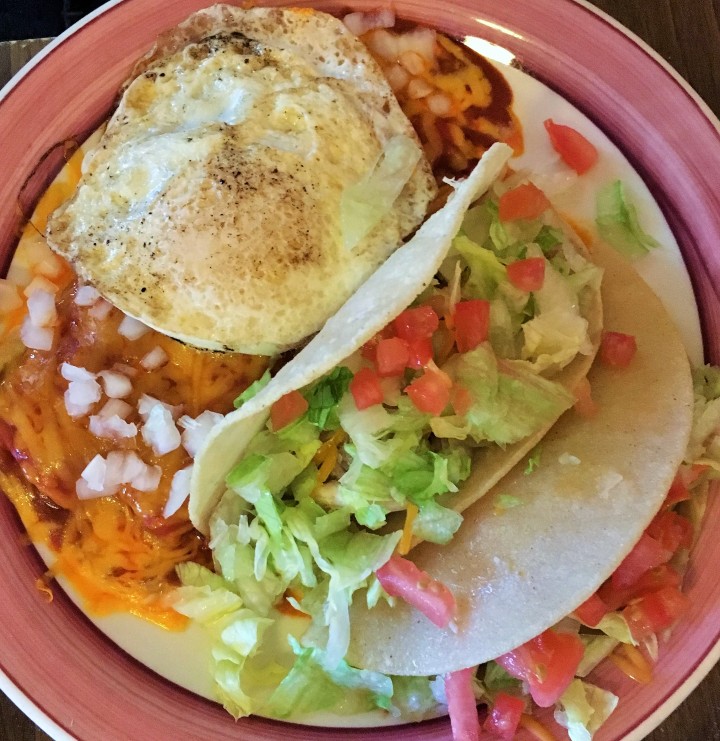 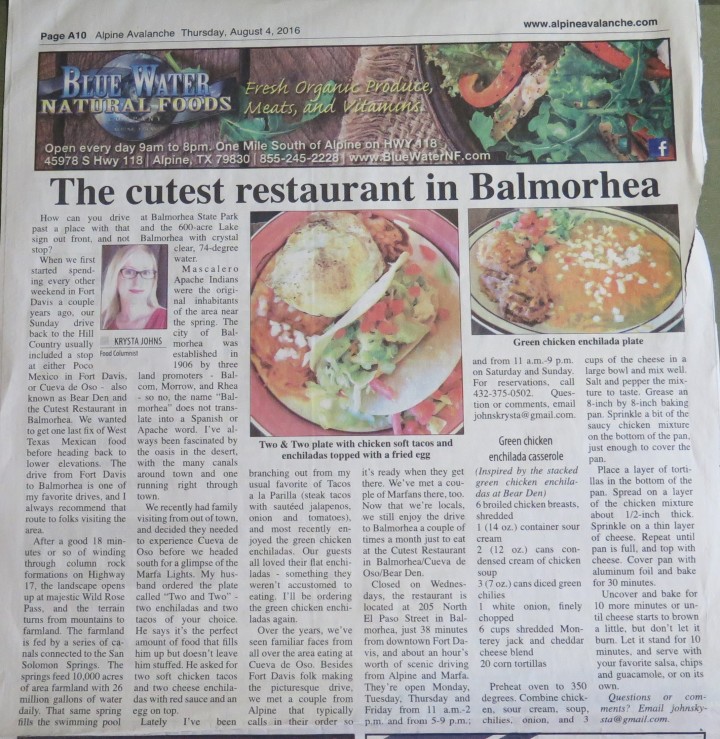