Driving down a dusty backroad in Fort Stockton the other day, I couldn’t help but notice all of the prickly pear cactus lining the roadway, loaded with the purple jewels of the desert that I’ve come to know and love since moving to the high desert.

“I need to start carrying a bucket and a pair of tongs,” I thought to myself. “Too bad we can’t pick some,” I said aloud.

“We don’t need to pick those, we have plenty all over the place at home,” he reminded me.

And it was true, in Fort Davis, you can’t throw a stick without hitting a thorny, prickly pear cactus filled with fruit, called “tunas.” 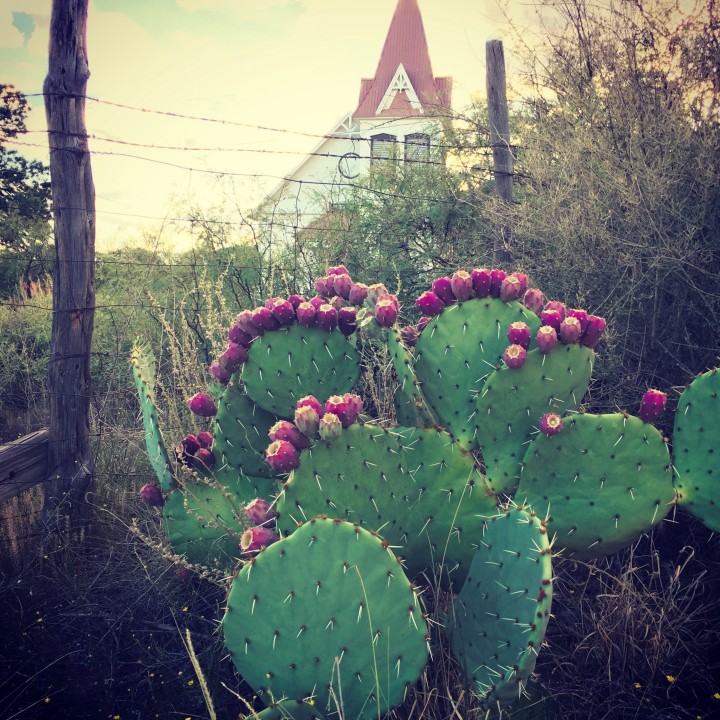 Two years ago, we planted thornless prickly pear cactus from cuttings in our landscape along the highway in downtown Fort Davis. Being next to pedestrian traffic on the sidewalk, we wanted something that would stay compact, add lots of local-plant visual interest, and produce our own crop of tunas.

May 2017, shortly after we planted our cuttings in our main street remodeling project. 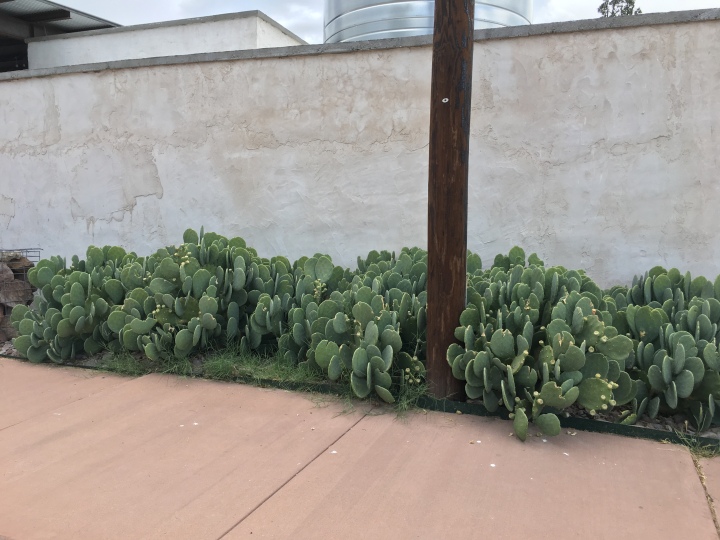 “Nopal” is the Spanish word for cactus. It has been a staple food for Native Americans for centuries. In Mexican and Mexican-American cultures, nopal (specifically Prickly Pear) is part of the diet – but only the young plants are eaten because the older they get the tougher they are. The prickly pear juice from the fruit (which are called “tunas”) is used commonly in jellies, candies and the famous Prickly Pear Margarita.

Since we planted those half-a-dozen small pieces of cactus, our prickly pear have grown and transformed by about a million times. I might be stretching it a bit, but it’s been incredible to watch them fill up that once-sparsely planted rock garden and grow into the mature plants that they have. The trunks on the plants are enormous now.

They produce lots and lots of pads, beautiful yellow flowers, and tunas that turn purple eventually, but in our experience, they take about six months or so to turn purple. There are even some tucked deep back under the protection of massive pads that are purple and appear to be ripe, but they were leftover from last year. So much for producing our own tunas from the landscape.

Last year, my husband helped me harvest tunas from an isolated stretch of dirt road, and we filled up a bucket in no time flat. That was the easy part. Cleaning the fruit is the hard part.

There are different techniques including placing them in a colander under running water and shaking them to get the little thorns off. Some folks use a small torch and burn the thorns off. Some flame-grill the tunas to get it done quicker, and to do more than one at a time.

Last year, I opted for carefully holding each fruit with a fork and slicing off the skin. It’s not an easy task to peel a prickly pear fruit, but I managed to get through them all, not quite unscathed. Prickly pear tunas are slippery, and I lost control of one… it managed to land up against my apron, attached like Velcro.

Not thinking, I ran my hands over my apron to wipe them off, and found all of the teeny stickers that came from that one little fruit, with both of my hands. I couldn’t see them but I sure could feel them. Be more careful than I was. I think I’ll use fire for thorn-removal this year.

Last year, we used our juicer to extract the seeds. This year, I plan to slice the fruit in quarters after burning off the thorns (no peeling!) and put it in a pot with enough water to cover. Bring it to a boil and cook for 10 minutes, then mash with a potato masher, strain the juice and water through a colander with two layers of cheesecloth to remove seeds and pulp before using the beautiful purple nectar. 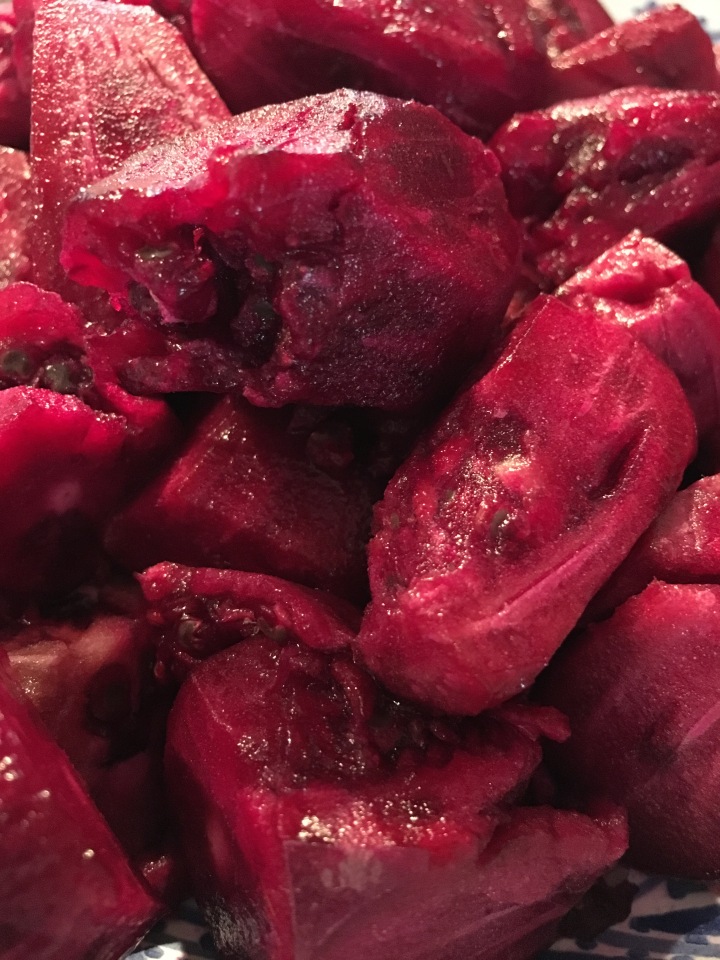 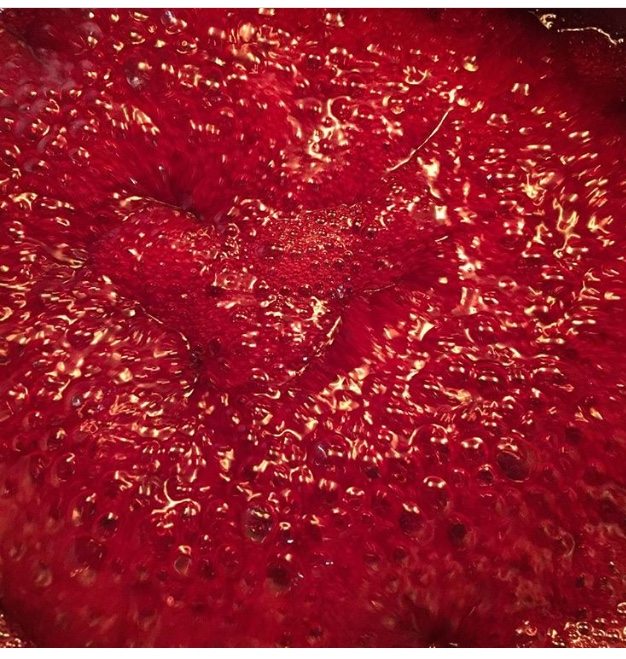 And don’t be afraid to use some of that hard-earned juice in a margarita or two! 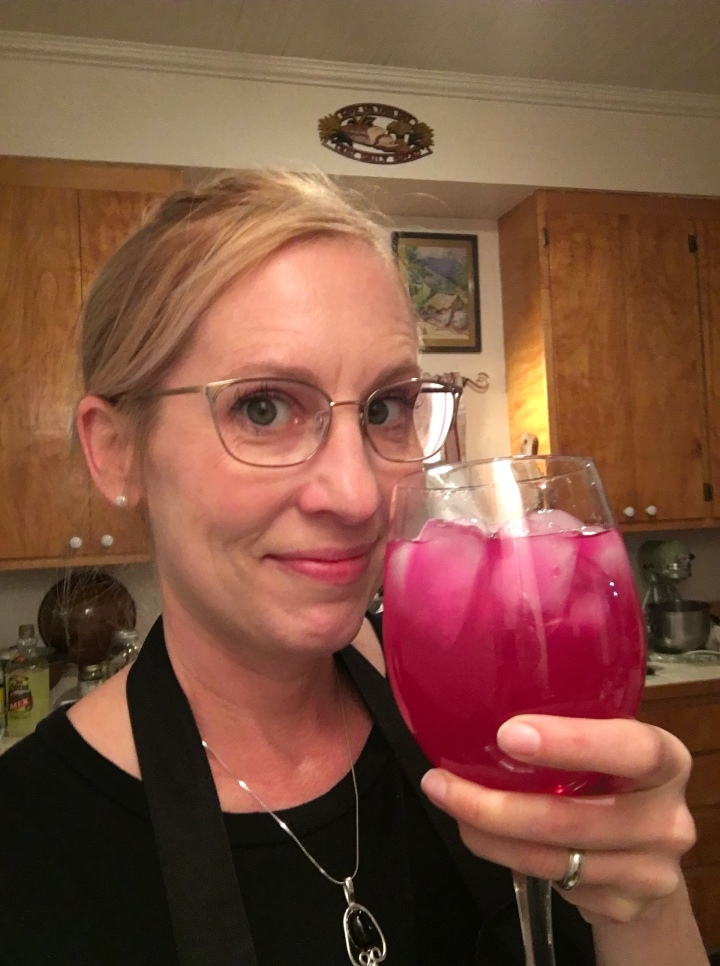 Hard boil cactus fruit juice, pectin and lemon juice for 3 minutes (“hard boil” means the point at which the brew still bubbles even when you stir it). Add sugar and bring back to a hard boil for 2 minutes or until the jell point is reached.

Pour, boiling hot, into hot jars. Seal at once.